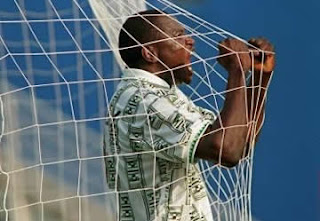 Yekini died about two months ago at the age of 48. He hailed from Ira in Oyun Local Government Area of the state.

The government disclosed this in Ilorin at a media briefing on Wednesday after the state’s weekly executive council meetings.

The media conference was attended by the Secretary to the State Government, Alhaji Isiaka Gold; the state Commissioner for Education, Alhaji Saka Onimago; his counterparts from Information, Mr. Tunji Morounfoye; and Sports, Mr. Kayode Towoju.

The government also posthumously honoured the former governor of the state, Muhammed Lawal by naming the Ilorin Golf Club after him.

Towoju said the government named the golf club after Lawal because he encouraged and promoted the growth of golf game in the state during his administration.

He added that Lawal’s administration rehabilitated and upgraded the golf club to international standard.

The commissioner said the Ola-Olu/Central Bank Quarters Road was named after Yekini because of his contributions to the growth of football in the country.