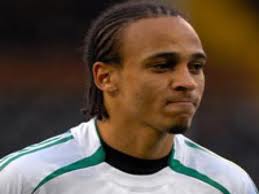 Osaze Odemwingie has decided not to don the green jersey of Nigeria again according to Super Eagles manager, Stephen Keshi.

Keshi revealed that the highly rated striker will no longer be a part of the national team following the player's disenchantment with previous regimes.

Odemwingie last played for the Super Eagles in February in a 2013 Africa Cup of Nations qualification game against Rwanda in Kigali.

The West Brom forward then became injured and has not featured for the side since then. He was invited to play against Liberia last month but declined and the coach has now revealed that the 31-year-old has said he will no longer play for his country.

"I spoke to Odemwingie before the Liberia game and he told me that he had decided not to play for Nigeria anymore," Keshi told Supersport.com.

"He told me that he has no problems with me as a person and that he took his decision even before I assumed position as national team coach."

Odemwingie has had a history of falling out with national team coaches.

He publicly criticised the tactics of Amodu Shuaibu after the 2010 Africa Cup of Nations in Angola.

Later, he blamed Swedish trainer Lars Lagerback for the country's early defeat in South Africa 2010. He also infamously had a spat with Samson Siasia through his Twitter account.

"He said he was unhappy at how he was treated in the past in the national team. He explained that prior to Nigeria's participation at the 2010 FIFA World Cup, he played in all the qualifying games but was dropped at the finals," said Keshi.

"He said he was angry at the treatment meted out to him but did not discuss it with anyone. I told him that was not the best way to handle issues and that if he had already decided not to play for the national team, he should have opened up to me when I invited him to play."

However Keshi believes Odemwingie still has a future with the national team.

"I told him that he has to give me the room to work with him; for us to work together and if he does not like the way I work and the atmosphere in the camp, then he can decide to stop playing," Keshi said.

"Deciding that you don't want to play for Nigeria because of what happened in the past is not the best. I understand his feelings. I think he might change his mind but I really don't know. The ball is in his court."