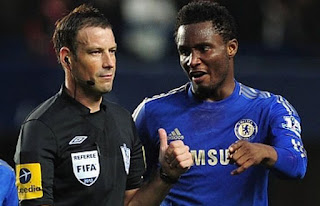 The Metropolitan Police has confirmed that it has dropped its investigation into complaints over alleged racist comments made by referee Mark Clattenburg.

However, Police have since stated that "without a victim and/or any evidence that any offence has been committed", there is no line of enquiry that can be pursued.

A statement from the Metropolitan Police read: "An investigation was launched into alleged comments made during a football match between Chelsea FC and Manchester United FC at Stamford Bridge on October 28, 2012.

"This follows on from a complaint received by the Metropolitan Police Service on October 29.

"Enquiries were made and no victims have come forward.

"If the situation changes and a victim and/or evidence to support an allegation of a crime comes to police attention then further enquiries will if appropriate be made."

Chelsea quickly dropped the Spaniard's allegation against the 37-year-old, although they have continued to support the Nigerian midfielder, with club chairman Bruce Bruck once again discussing the complaint on Tuesday.

"The reaction has been very unfair," he told the Evening Standard. "We weren't interested in any confrontation with the referee or anybody else, had no thoughts of revenge on the referee.

"We were guided by obligations that are imposed by the Football Association and also as an employer. FA rule E14 basically says a participant shall immediately report to the association any incident or matter which may be considered to be a misconduct.

"I spoke to the players involved, either because they were allegedly the recipient of that abuse or had heard it, three separate times. I asked them if they could be mistaken. I asked them, if they might have heard 'Mikel' instead of 'monkey'. I thought I had covered that base.

"[The decision] was made after a great deal of anguish and after talking long and hard that evening about what should we do.