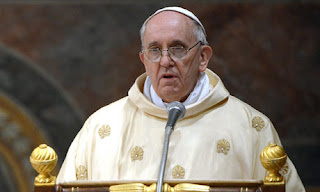 The Pope, in his Easter message delivered yesterday from the central balcony of St. Peter's Basilica, passionately called for peace in Nigeria and other troubled spots in the world even as South Africans used the end of the Christian holy week to pray for their former president, Nelson Mandela’s quick recovery.


He took ill on Wednesday and was rushed to the hospital where he spent his Easter Sunday while receiving treatment for a recurrence of pneumonia.


While the Pope was praying for peace in Nigeria, security agents clashed with gunmen, suspected to be Boko Haram members in Kano during which 14 of the suspected terrorists were killed in the duel.


The Pope lamented the continuous terrorist attacks on Nigeria and prayed that peace should return in earnest to the country where about 4,000 people have been killed since 2009 when Boko Haram began its campaign of terror.


The Catholic pontiff said: “May unity and stability be restored in Nigeria, where attacks sadly continue, gravely threatening the lives of many innocent people, and where great number of persons, including children, are held hostage by terrorist groups.”


He also mentioned Mali, Democratic Republic of Congo (DRC) and the Central African Republic (CAR) as part of troubled spots in Africa.


He also placed special emphasis on Syria saying: “Dear Syria, how much blood has been shed! And how much suffering must there still be before a political solution is found?”


The Pope’s message which began with a simple "Happy Easter!" also emphasised on humility, saying: "Christ has risen! What a joy it is for me to announce this message... I would like it to go out to every house and every family, especially where the suffering is greatest, in hospitals, in prisons.”


Later in his speech, Pope Francis said: “We ask the risen Jesus, who turns death into life, to change hatred into love, vengeance into forgiveness, war into peace.


“Peace for the Middle East, and particularly between Israelis and Palestinians, who struggle to find the road of agreement, that they may willingly and courageously resume negotiations to end a conflict that has lasted all too long.


“Peace in Iraq, that every act of violence may end, and above all for dear Syria, for its people torn by conflict and for the many refugees who await help and comfort.


“Peace in the whole world, still divided by greed looking for easy gain, wounded by the selfishness which threatens human life and the family, selfishness that continues in human trafficking, the most extensive form of slavery in this 21stCentury.”


Jonathan in his remarks at the church service in Lagos said that despite the wave of terror attacks on the country, Nigeria would remain united and stronger, stressing that his administration was working hard so as not to allow terrorism to divide the country.


He said the effects of terrorist attacks on the country could have been more devastating but for the fervent prayers of Nigerians for peace and stability.


He therefore urged Christians to sustain the zeal with which they have been praying for Nigeria, adding that Christ came to the world at a critical time of human existence yet changed the world by preaching peace, unity and love, virtues that he advised Christians to imbibe in honour of Jesus.


The president rekindled hope of an imminent end to power outages in the country, saying that his administration plans to stabilise power supply by 2014.


According to him, the process of the privatisation of the power sector would soon be completed to ensure total reform of the sector in order to guarantee stable power supply.


What could have been another black Easter was averted yesterday in Kano as operatives of the Joint military Task Force (JTF) raided the hideout of suspected terrorists during which they recovered a cache of arms and ammunition as well as a Volkswagen Golf car loaded with primed improvised explosive devices (IEDs).


The security operatives, following a tip-off, had stormed the hideout at Yan’Awaki area of Unguwa Uku quarters in Kano metropolis in the wee hours of the day.


They however, met stiff resistance from the gunmen who engaged them in a duel which claimed the lives of 14 suspected terrorists.
Spokesman of the JTF, Captain Ikedichi Iweha, confirmed to THISDAY that 14 terrorists were killed while 14 AK-47 rifles were recovered in the aftermath of the raid.


He however added that one soldier was killed in the battle, while another one was seriously injured.
He said several ammunition and IEDs were recovered while the hideout of the terrorists was demolished immediately after the gun duel.


He said: “We are working very hard and security agencies will not relent in their efforts to ensure peace and stability in the state.”
There was low turnout of worshippers at many churches in Kano as people stayed at home to pray due to fears of Boko Haram attack.
The churches, despite heavy presence of security personnel deployed to ensure hitch-free service, were attended mostly by women and children.


Thorough searches were conducted on worshippers before they were allowed to enter the premises of the churches.
There was relative peace in Maiduguri and other towns of Borno State, which have been under the siege of the Boko Haram sect during the Easter celebration.


People went about their activities without any attack as the insurgents, who have been under attack from soldiers and other security officials in the last few days, seemed to have gone into hiding as there was no major incident throughout the weekend.


Though security operatives deployed in churches remained on the alert to prevent any terrorist attack, their presence did not lead to any significant improvement in attendance at the churches.


The Federal Capital Territory (FCT), Abuja also witnessed low key Easter celebration as most residents either travelled out of the territory or decided to stay indoors.


THISDAY checks revealed that while there was adequate security, especially at the churches and strategic locations in the Federal Capital City (FCC), there were few people and vehicles on the roads.


Unlike in the last two years, this year’s Easter church service was done under the watch of security agents who were deployed in many of the major churches in the FCT that might be targets for terrorist attacks.