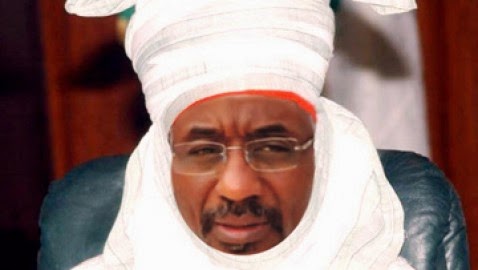 One of northern Nigeria's most influential Muslim leaders has called on people to defend themselves against attacks by the Boko Haram militant Islamist group.

The Emir of Kano, Muhammad Sanusi, said residents should "acquire what they need" to protect themselves.

The BBC's Will Ross, in Nigeria, says such an intervention is very unusual.

A police spokesman said the Emir's comments were a "call for anarchy" and should not be acted on.

The emir, who until earlier this year was governor of Nigeria's central bank, normally stays silent on political matters.

He made the comments at a prayer meeting, following several further attacks in recent days blamed on Boko Haram.

Jihadists from the group continue to cause havoc in parts of north-east Nigeria, capturing towns and villages where they have been imposing their own strict interpretation of Islamic law.

Primary schools in one of the worst-affected areas have begun reopening after being closed for the past eight months.

Some of the schools are to be protected by self-defence groups.Deserting soldiers

The emir, who strongly criticised the government when he was a banker, said people should not be afraid of the militants and should prepare to defend themselves.

"These terrorists slaughter our boys and abduct our girls to force them into slavery," he said.

"People should not sit idle and say prayer is the only solution. People should be made aware of the importance of being in a state of preparedness and make sure they acquire what they need to protect themselves. We should be ready to give our lives."

The emir said residents should not wait for help from the military. There have been numerous reports of soldiers deserting, saying they are not as well equipped as the militants.

Police spokesman Emmanuel Ojukwu said: "Any call for citizens to arm themselves is a call for anarchy and lawlessness. And this is not allowed under our laws. Such a call should be disregarded. The police [force] is living up to its duty to protect lives and property."

Civilians have already played a key role in fighting the insurgency by forming local vigilante groups (known as civilian joint task forces) and this is now a wider call for everyone to stand up and be counted.

The emir may not have mentioned the group known as Boko Haram by name but this was a strong condemnation of the insurgents. It is highly unusual for the emir of Kano to be so outspoken on this issue.

Muhammad Sanusi was a persistent critic of the government when he was central bank governor and some of his detractors may criticise him for speaking out now but there is no denying that the situation in north-east Nigeria is deteriorating.

The emir's strong message contrasts sharply with the government, which has stayed almost silent on the conflict except for the oft-repeated promise that the insurgents will be defeated.

Over the weekend a local vigilante group helped the military recapture the town of Chibok which Boko Haram had seized 48 hours earlier.

Boko Haram, which says it is fighting to create an Islamic state in Nigeria, has repeatedly targeted villages in Borno state in recent months.

There are reports of many Boko Haram members being killed in Sunday's raid.

Schools in Borno state were shut down eights months ago because of security concerns after attacks by the militant group.

State officials said 450 primary schools were expected to reopen on Monday in a staged process intended to lead to the reopening of almost 1,400 schools in the state.

The BBC has confirmed that some primary schools in the state capital, Maiduguri, have already reopened.

The chairman of a state committee on education, Mohammed Dongel, said fencing had been erected around schools and security guards were ensuring "24-hour surveillance".

Secondary schools in Borno are due to remain closed until internally displaced people sheltering in them can be moved to alternative accommodation.