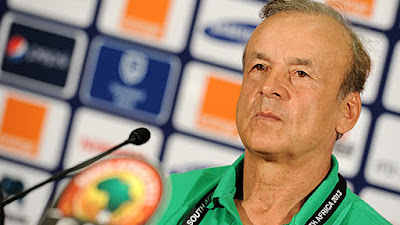 Nigeria coach Gernot Rohr has ruled out bringing in new players to bolster his squad for the 2018 World Cup in Russia.

The West Africans have been hit by a goalkeeping crisis; first choice Carl Ikeme was diagnosed with leukaemia, both Daniel Akpeyi and his replacement Ikechukwu Ezenwa have failed to impress while Francis Uzoho is inexperienced.

Rohr is not tempted to call up another goalkeeper, despite growing calls from a section of fans for him to recall the country's most capped player Vincent Enyeama from retirement.

"We have built a good environment for the team and I believe all the players gave everything to secure the ticket to Russia," Rohr told BBC Sport.

"It looks very impossible to get Carl Ikeme to play in Russia, but Ikechukwu Ezenwa showed in big matches so far that he can be in goal.

"The young boy Uzoho had a great game against Argentina so I've sent the goalkeeper trainer to continue to provide support for this boy in Spain.

"We are not limited as we also have other goalkeepers like Akpeyi, Ajiboye and Alampasu in the team, so I believe we are fine."

At the last tournament, Nigeria drafted in experienced Peter Odemwingie and Shola Ameobi, with the former scoring the only goal against debutants Bosnia-Herzegovina to give Nigeria their solitary victory in Brazil.

Many have cited a lack of experience in the current squad, but Rohr is confident he has the personnel to get the job done and will stick with his current group in Russia.

"You have to respect what the former players have done in the past but be careful that you don't try to bring them back because people think so," said Rohr.

"We have big experience in captain [John] Mikel Obi, Victor Moses and our left back Elderson who is now playing in Belgium.

"If we feel the need to strengthen this squad we know what to do because for nearly two years now we've had a good atmosphere so far. Another good news is that the young striker in Wolfsburg [Victor] Osimhen is also playing now.

"I will make the [provisional] squad based on this group and also give one of the CHAN boys a chance as well.

"We can't just keep bringing in player after player when you already have those who have proven that they can do the job," Rohr added.

The Super Eagles will be making a sixth appearance at the World Cup tournament in Russia wehere they will play Argentina, Iceland and Croatia in Group D.