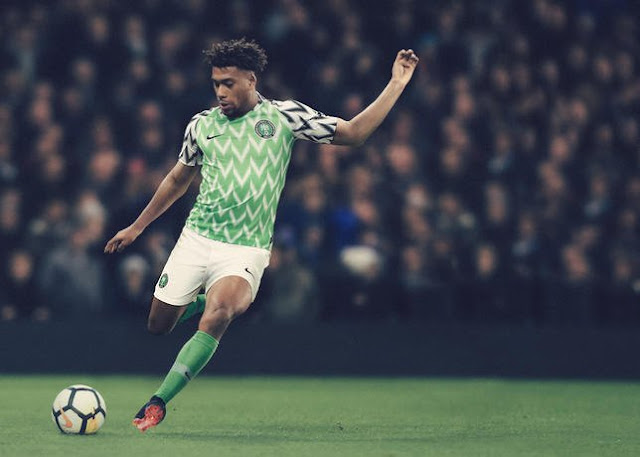 Nike Football shared a video on their official YouTube channel which reveals several of the national team's key men catching a first glimpse of the team's new attire.

In the 1 minute 20 second clip, Wilfred Ndidi, John Obi Mikel, Alex Iwobi and Kelechi Iheanacho are shown giving their verdict on what is a dazzling offering from Nike.

"I can see the players going crazy over this one," Mikel said when he was shown the national side's home shirt, in Nigeria's famous dark green with an eye-catching neon logo.

The away kit, a neon and white retro design on the body, and dark green chevrons on a white background on the arms, received a more muted response.

"This is different, you know," Iwobi added, somewhat diplomatically, while Ndidi was a little more enthusiastic, claiming he just "couldn't wait" to get the kit on in Russia this summer.

Despite the mixed reaction, the kit's similarity to the iconic shirts worn by the nation's Golden Generation in their maiden World Cup campaign in the United States in 1994 should earn it major points for nostalgia among Super Eagles supporters.

"A constant in Nigeria is an endearing love of football," NFF President Amaju Pinnick, told Nike's official website. "When football is on, everything stops. The new Nike kit designs honour our federation's rich traditions. Moreover, they celebrate everything we relish about our culture."

"With Nigeria, we wanted to tap into the attitude of the nation," added Dan Farron, Nike Football Design Director. "We built this kit and collection based on the players' full identities.

"We started to see trends in attitude and energy connecting the athletes to music, fashion and more. They are part of a resoundingly cool culture."

According to the New Telegraph Online, Nike presented the kits to the Nigeria Football Federation at a ceremony in London on Wednesday.

Nigeria are using Nike as their kit manufacturer after having been fitted by Adidas for their last two World Cup campaigns - in 2010 and 2014.

They will wear the shirts for the first time on March 23 when they face Poland in a friendly in Warsaw.

Nigeria have been pitted against Croatia, Iceland and Argentina in World Cup Group D.