Nigerian launches 'Save me from dying in this shithole' GoFundMe campaign 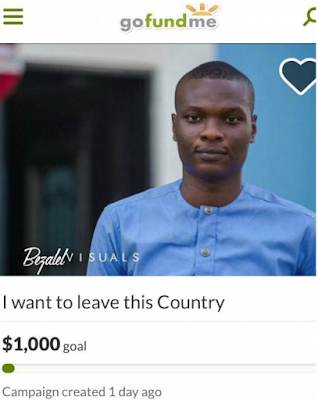 A Nigerian, Oladapo Olawuni, has launched a gofundme campaign to raise $1,000 to enable him leave the country.
Olawuni said he is tired of Nigeria, as the country holds nothing for him.

“I'm tired or this country and I need to leave.” he wrote. “This country has nothing for me. Save me from dying in this shithole. Plis dear.”

The account, opened 23 hours before the filing of this report, has received no donation yet — although it has been generating buzz on social media, particularly on Facebook.

A Facebook user, Oluwakayode Kakaki Agboola, shared the link to the gofundme account with the caption: “Help a Nigerian stranded in Nigeria. Support, Donate and join the campaign.”

Another user, Prince Adewole Adetokunbo Oyeledun, who commented on the same thread, said: “DSS should flag this guy. Let us hold this one against his will. We are in it together. Where does he think he's going? Nonsense!!!”

A survey conducted by CLEEN foundation and Afribarometer in 2017 revealed that one out of every three Nigerians is seeking to leave the country in search of greener pasture.

The survey also revealed that about 8 in every 10 Nigerians who wish to leave the country are aged 35 or below.

Similarly, a survey conducted by NOIPolls last year showed that Nigerian doctors move in droves to the United Kingdom, United States and Canada.