The fast and furious motorcycle taxis in Nigeria 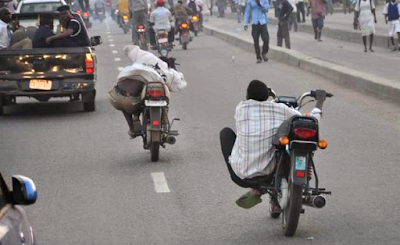 It is a few minutes after noon, and Abimbola Thomas needs to get to work. He is only 10km (6.213 miles) away from his office. At any other time of the day, this would have been a 10-minute journey, but not during Lagos lunch-hour traffic. If Thomas gets in a car, this trip could take him up to 120 minutes. To save time, Thomas hops on the back seat of one of the dozens of motorcycle taxis that are waiting for customers at stalls and shops downtown. He puts his arms around the driver's waist, and the pair speed off.

While the Lagos State government does not officially promote motorbike taxis, growing demand for ways to reduce maddeningly long commute times is making an increasing number of people jump on the backs of two-wheeled taxis in Nigeria.

Tech companies are now trying to make it easier for riders like Thomas to link up with motorcycle taxis no matter where these urban passengers may be. Last year, several ride-hailing applications designed to connect riders with motorcycle taxis were launched. One is called the Gokada app.

Residents in Lagos call these two-wheeled taxis "okadas", because they are so much faster than cars. Okada is the name of Nigeria's first private commercial airline, Okada Air.

Motorcycle taxis first showed up in the country's commercial capital in the late 1990s.

During those early years, okadas got a bad reputation because of reckless operators and gruesome accidents. Back then, the number of broken bones and bloody limbs grew so fast that local media nicknamed a section of the National Orthopaedic Hospital Igbobi the "okada ward".

Today, riding okadas is a little safer because Lagos State restricts them to certain inner streets.

Uber debuted in West Africa five years ago. Since then, there have been several less-than-remarkable local efforts to duplicate the company's success in the United States. The standout appears to be ride-hailing apps for motorcycles because they are responding to Nigeria's unique market needs: They can zip through stalled traffic.

Users download an app and request rides on their smartphones, and branded motorcycles show up on demand. As an added feature, users can also hail branded bikes on the street. Since Gokada launched, three other motorcycle-hailing startups have debuted in Nigeria: Max, SafeBoda, and Oride.

Gokada boasts over 1,000 riders. Max, founded by two alumni of the Massachusetts Institute of Technology in the US, says it has over 1,000 motorcyclists.

Anticipating billion-dollar market growth, investors have thrown millions of dollars at these startups. Rise Capital and a consortium of local funders invested $5.3m in Gokada. The company plans to use the money, in part, to open a state-of-the-art driver-training school to verify up to 500 operators at a time, thereby increasing daily rides tenfold.

Operating in a grey area

Fahim Saleh, the cofounder and co-CEO of Gokada, admits his company exists in a grey area legally.

"A futuristic tech-enabled Lagos can have motorcycle taxis," he explains, citing examples in East Asia such as Go-Jek in Indonesia and Grab in Thailand. "Gokada is not only making incremental improvements, [but] we are going leaps and bounds to ensure our drivers are safe including weekly training, adequate safety gear, tech-enabled driver-behaviour tracking, intensive pre-screening, rapid-response in-house medics, and more. We really do care about our drivers and our customers."

Salleh's concern is warranted; 747 motorcycles were involved in road accidents during the fourth quarter of 2018, according to Nigeria's Bureau of Statistics. That's more than one out of every five accidents.

The cost of going slow

People in Lagos call traffic bottlenecks go-slows. Most residents spend more than two hours in traffic every workday. The cost of going slow is massive. According to one former Lagos State governor, every year, go-slows rob the city's economy of 42 billon naira ($11.6m) of economic output.

To understand why, consider the geography of Lagos. With a landmass of about 3,600 square kilometres, it is Nigeria's smallest state. However, more than 18 million people live in the city of Lagos. Five million registered vehicles - 200 vehicles per kilometre - cram onto the city's 9,100 roads and expressways each day.

Just get me to work

On his part, Abimbola Thomas, our harried commuter, was now used to the adrenaline rush of motorcycle taxi rides. He tapped an app on his smartphone and hailed a two-wheeler. It arrived within minutes and took him to his office on time. "Bikes are much more convenient as a form of transportation in Lagos," he called out as he sped off.