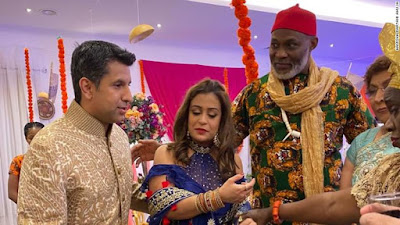 Two of the world's biggest movie industries, Bollywood and Nollywood have joined forces to produce a new movie about an inter-cultural love story.

Titled 'Namaste Wahala' it is directed by businesswoman-turned-filmmaker, Hamisha Daryani Ahuja, who weaves a tale across two diverse and rich cultures -- India and Nigeria.

'Namaste Wahala' loosely translates to 'Hello trouble' and it is filmed mostly in English with a mix of Hindi and Nigeria's pidgin language.

Ahuja has lived in Nigeria since she was a child and says her experience living in Africa's most populous country inspired her to make her debut film.

"I am Indian but I have lived in Nigeria my whole life. Everyone loves Bollywood and Nollywood, so I thought 'how is it that no one has done a love story between the two?'" she told CNN.
Now in her 30s, Ahuja says she decided to fuse her experiences from both cultures to create a love story that people can relate to.

Nigerian and Indian weddings are colorful and lavish affairs -- and they are also big business.
A Nigerian wedding can cost up to $13,515, while India's wedding industry is reported to be worth $50 billion, according to Vogue Business.
Through Namaste Wahala, both wedding industries fuse, showcasing a celebration between both cultures.

"The story has been in my head for a long time but I wanted it to be completely accurate. I wanted both cultures to be portrayed the same, that no culture was above the other," Ahuja said.
Filmed entirely in Lagos, Nigeria's commercial nerve center, Ahuja says it features classic Bollywood dancing and singing scenes to keep it as authentic as possible.
"It is a fun comedy, a lot of laughs with a few tears," she said.

Nollywood to the world

Nigerians have taken to social media to express their excitement about the upcoming movie release.
"The name alone wants me to watch it. Namaste [means] peace. Wahala [means] trouble/problem. Gotta watch it with some Chicken Biryani and Jollof Rice for the culture(s)," wrote Twitter user Jerome Antwin- Lewis.

This is not the first international collaboration with Nollywood. Over the past years, Nigeria's movie industry has partnered with China, France, and the US to produce and distribute wide-ranging movies.

In 2019, for example, China and Nigeria partnered to create their first major movie collaboration, and in the same year French Media giant, Canal+ acquired Nigeria's ROK studios as part of its expansion plans into Africa.

Ahuja says these partnerships are important because they help showcase Nollywood's talents beyond the walls of Africa.

"We have so much talent in Nollywood. What I think with these international collaborations is that we will be able to showcase all these amazing work internationally."