Set them free! The judge who liberates Nigerians forgotten in jail 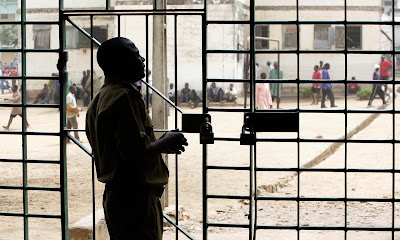 In a crowded prison courtyard in Suleja, Nigeria, a judge flipped through a battered folder detailing the case against a young woman who stood quietly before him in a faded pink dress.

She was charged with “issuing a dud cheque”, a crime that carries a maximum sentence of two years in prison. But she’d already spent three years in prison awaiting the outcome of her trial.

The judge, Justice Ishaq Usman Bello, sat at a long table surrounded by fellow judges and prison officials. From an awning hung a framed poster of Leonardo da Vinci’s Last Supper and a broken clock. Inmates crowded in the cellblocks either side of the courtyard to watch the proceedings, their arms hanging through the bars.

After several minutes of hushed discussion at the high table, Justice Bello leaned toward the microphone and spoke. “In light of the duration of detention exceeding the maximum penalty for the alleged crime, I hereby discharge you from this prison. You are free to go.”

The woman, who’d been stoical before the pronouncement, collapsed to the ground and began to sob. She thanked God and the judge in equal measure, and the inmates watching from their cells erupted into cheers.

By the end of the day, 13 other inmates had been released. Four had been in prison on remand longer than the maximum sentence for their alleged crime. The others had been imprisoned for failing to pay tiny fines for minor offences.

They were just the latest beneficiaries of a mission to deal with Kafkaesque failures in Nigeria’s justice system. In 2016, Justice Bello began visiting prisons in his own jurisdiction, and the following year a presidential committee on prison reform and decongestion was established, which is led by Justice Bello and funded by the federal attorney general. The judge has visited 36 prisons and ordered the release of 3,822 inmates – about 5% of the Nigerian prison population.

“It is part of my statutory responsibilities as chief judge to visit the prisons and address some challenges,” Justice Bello said. “One of them is congestion, others are when [defendants] stay in prison without going to court. There are many lapses that need to be addressed, so it has been my tradition as head of court to do that.”

Spending longer awaiting trial than the maximum sentence for the crime violates the most basic legal protections guaranteed to Nigerian citizens, not to mention one of the few principles of international law that can be considered truly universal – habeas corpus.

Chukwudi, whose second name is being withheld because his trial is ongoing, spent nearly five years incarcerated before being released on bail in 2016.

In 2012, Chukwudi was driving from the capital city, Abuja, to visit his family in south-eastern Nigeria when he was pulled over by officers from the Special Armed Robbery Squad (Sars). He was arrested and accused, though not formally charged, with purchasing a stolen vehicle. He denies the allegation.

Chukwudi was taken to Sars headquarters in Abuja. It was almost a year before he was brought before a court to be formally charged. The first time he appears on official records is 5 March 2014, when he was sent to a medium security prison near the capital to wait for his trial. “I was happy when I was brought to court because the pain of Sars is too much”, he told me. “In Sars, you are relieved only by the mercies of God. I saw people die. It was survival of the fittest.” Neither Chukwudi nor his family could recall the precise date he was arrested. Sars did not respond to requests for comment.

Chukwudi hoped that once he was finally brought to court, his ordeal would soon be over. “But it happens not to be like that,” he told me. “You discover that a whole lot of systems are involved.”

Like tens of thousands of Nigerians, Chukwudi was denied bail because he was unable to provide a guarantor.

Despite Nigerians’ constitutional right to bail, many judges fear defendants may disappear if released, and believe that “remanding” defendants in prison serves the greater cause of justice.

Countless visits to court resulted in Chukwudi’s case being adjourned, sometimes before it had even begun, forcing him back to prison while he waited for a new date.

By the time he was finally granted bail in November 2016, Chukwudi’s father was dead, his job and home lost, and friends and family distanced from him. “Normally if you come out of prison it should feel good. One experiences another freedom. But in Nigeria that is where another problem starts for you,” Chukwudi said. “Anybody who comes to know that you have been in prison doesn’t want to relate with you. Even your own family members. The way they are seeing it, the name of the family has been put to shame because you went to prison. When I came out, I learned that nobody wanted to see me.”

These days he is the pastor of a church known as the Transformation Ministry that supports former inmates returning to civilian life. Eight ex-prisoners are currently benefiting from free basic accommodation. “I just fixed two with laundry jobs, and am working on computer training for the others,” he said. “It’s my way of giving back.”

Remand inmates make up about 69% of Nigeria’s prison population. While this is not high compared to many western countries, the length of time they spend awaiting trial is. In prisons where this data is available, most defendants have been on remand for between one and four years, some for more than a decade.

“In Rivers State, 14 people were awaiting trial for 15 years. Not one day were they taken to court,” Justice Bello told the Guardian, shaking his head. “We had to release them.”

Because there is no systematic way to monitor cases, defendants may simply be forgotten in prison. Data collected by the legal aid organisation, Network of University Legal Aid Institutions, shows that there are more than 160 cases where defendants have not been assigned a date for their next trial. “Some of them last attended court in 2017,” the network’s Charissa Kabir told me.

Another factor that exacerbates crowding is the practice of imprisoning convicts unable to pay small fines for minor offences. Research by Prawa, a Nigerian security, justice and development NGO, found that up to 80% of inmates were living on less than $130 per month prior to arrest.

Income lost during remand combined with legal expenses often leave convicts deep in debt and unable to pay, meaning many serve between six and 12 months in prison instead. Up to 90% of inmates the presidential committee has released fall into this category. “Fines are paid by the government, and sometimes Nigerian NGOs”, said the committee secretary, Leticia Ayoola-Daniels.

Numerous cases reflect extreme poverty. “We found a scenario where a pregnant woman was said to have stolen cassava, and she was there awaiting trial for almost four years,” said Justice Bello. “It’s lamentable.” Shortly after arriving in prison, the woman miscarried.

He worries about the damage prisons inflicted on defendants behind bars. “To be in prison is a very dangerous thing. Some of them have attained some level of mental deterioration because of the horrendous nature of the environment they live in,” he said.

The judge seems to be trying to activate the justice system by shaking its conscience rather than by devising a new judgment – the usual tactic for activist judges. He invites officials who have unresolved cases to prison to face defendants, and account for what went wrong. By admonishing lax lawyers and judges he turns turns lapses which previously went unnoticed into a source of personal and professional shame.

“The visits do try to restore fairness, in the sense that they acknowledge that lapses in the administration of justice have resulted in the loss of freedom,” said Melissa Omene, a lawyer who has worked across government and civil society justice reform efforts.

“Addressing a practitioner’s failure to carry out his duty requires more than simply calling on him to do so. Did he fail to act due to a lack of interest or resources? Did he fail to act for political reasons, or fear? Each of these will require a different reform strategy.”

Justice officials need to be able to see into their own systems in order to detect and manage problems. To do that, they need better data. A quieter but potentially transformative piece of the committee’s work is the rollout of a federal prison (now corrections) information management system (Cims) as part of its wider efforts to establish a national criminal justice database.

Cims has been partially implementing in 16 states, but only one prison is making full use of the platform. It features an early warning system that alerts the attorney general if an inmate stays on remand beyond 90 days, and allows officials to identify and hold to account officials and departments that cause unreasonable delays.

If well managed, Cims could regulate some of the chaos that currently governs the lives of inmates. At the very least, digital records will make it harder for them to officially disappear. But it’s is only part of the solution. If not backed by political clout and people able to use the data, Cims risks remaining a technical solution to a political problem.

Nigeria’s justice system has been the subject of numerous reform efforts over the past two decades. Committees have been formed, new laws passed, presidents come and go, and people like Chukwudi continue to lose years of their lives to a system that cannot or fails to detect those who fall through its cracks.

Despite Chukwudi’s ordeal and everything he’s lost, when he compares himself with other former inmates, he still considers himself one of the lucky ones. Every Sunday morning his congregation files into the little church he has coaxed to life. The room fills with people, music and choruses of prayer, and it makes him feel a part of something holy.