Nigeria's Nollywood gets creative in response to Covid-19 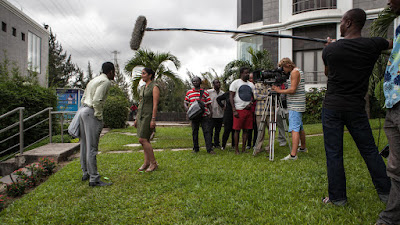 As coronavirus closed businesses around the world and forced billions to stay home, Nigerian director Obi Emelonye came up with an innovative way to keep filming.

Inspired by his wife's teleconferencing calls from their isolation in Britain, he wrote and put together a short feature about a couple separated between London and Lagos.

There was just one day for rehearsals and two for filming, and relatives shot the actors on mobile phones in their homes on two continents.

"I said to myself, 'What if I shoot a film remotely? I can direct my actors and produce it from home, and the cost is zero," the well-known 53-year-old director told AFP.

"I wanted to show young people that despite the countless difficulties of our profession, despite the coronavirus, you can make a film without funding, without even a real camera."

Inventiveness has always been a hallmark of Nigeria's Nollywood -- the second most prolific film industry on the planet -- as it has risen from shaky homemade movies to slickly-produced blockbusters.

But now, in the face of the coronavirus crisis that has seen social distancing rules shut down shoots and cinemas closed, the sector has needed that spirit more than ever.

"We are an endangered species, we have to be innovative and to push the boundaries," said Emelonye, whose short "Heart 2 Heart" was released for free on YouTube last month.

"Things are very bad? You can make them better!"

The Nigerian film industry is riddled with contradictions.

On the surface are the red carpets, glitz and glamorous stars with millions of Instagram followers.

But underneath, much of the sector is poorly-funded, salaries are miserly and rampant piracy robs it of crucial revenues.

The arrival of the virus has dealt a major blow just as producers try to focus on higher-quality movies, cinema audiences grow and giants like Netflix push to tap into the country of 200 million, the most populous in Africa.

Moses Babatope watched in dismay as a government order to close saw income evaporate over the past three months at the Filmhouse, a cinema chain he co-founded in 2012.

"We've been through other difficult times, but this crisis is even worse," he told AFP.

Babatope estimated loses for the sector had reached over $9 million (eight million euros) so far due to the virus.

Dozens of film shoots have been put on hold or scrapped and the legion of workers in the industry -- from make-up artists to technicians to ushers -- are going unpaid.

Netflix has suspended the filming of its first original series made in Nigeria and French media giant Vivendi has delayed the opening of its first cinema in the capital Abuja.

Distributors reckon some 50,000 jobs are under threat since the sector juddered to a halt.

"It's going to take a while before it really starts up again," Babatope said.

To navigate the current troubles the industry has begun pushing its boundaries.

A first screening in Abuja in late May saw all tickets sell out in just a few hours as viewers flocked to watched his film "Living in Bondage" from the comfort of their own cars.

"COVID forces us to rethink our habits, but it is also an opportunity to try new experiences," Okpaleke told AFP.

Producers and directors are also looking increasingly to the release their films on online streaming services like Netflix and its local competitor Iroko TV.

And even up-and-coming industry hopefuls were given the opportunity to keep on honing their skills despite the disruptions.

"Nowadays there is a huge demand for series from Subsaharan Africa despite a relative lack of training," said LAFAAC co-founder Francois Catala.

"I believe that online releases are the future of Nollywood."