Meet the Nigerian board game creator trying to change an industry 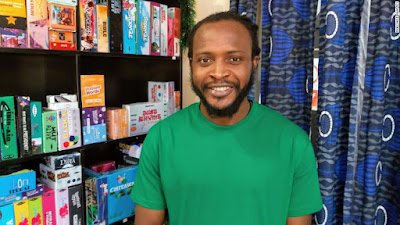 Kenechukwu Cornelius Ogbuagu has been obsessed with playing and building games his entire life.

As a child, he played board and card games including Snakes and Ladders, Whot, and Ludo with the kids in his neighborhood in Enugu, southeastern Nigeria, where he was born and raised.

Yet in a country that loves games such as chess and Scrabble -- even fielding a world champion Scrabble team -- Ogbuagu noticed a lack of Nigerian-made games. In 2013, he decided to create his own game while studying at the University of Calabar in southern Nigeria.

"There was a nationwide strike at government-owned universities in the country at the time, so nobody was going to class," Ogbuagu, now 29, says. With nothing to do, "eventually, we started playing tabletop games."

At the time, he was not sure how to create games, so he used cardboard, stones, and dice from an old Ludo game to make a dice rolling and card drafting game for him and his friends.
Many of Ogbuagu's friends in school enjoyed playing the game, inspiring him to turn his passion into a profession.

In 2016, a few years after making his first game, Ogbuagu founded a game production publishing company called NIBCARD, which focuses on tabletop games such as board and card games.

"I eventually learned to make games on YouTube," he says. "I learned how to make boards. I learned about direct imaging printers. I also found stores where I could get material to make the games I wanted."

That same year, he started an annual convention in Abuja, Nigeria's capital city, called the Africa Boardgame Convention, or "AbCon" -- a gathering of tabletop game lovers from across the country, which Ogbuagu says is the first of its kind in West Africa.

"Many Nigerians hold stereotypes about board games. They say, 'oh, it is a woman's game.' The convention exists to cancel those types of stereotypes," Ogbuagu explains. Roughly 500 people attend the convention every year, he adds.

But his big break came in 2017 when charity organization Voluntary Service Overseas (VSO) hired NIBCARD to create 2,300 copies of a game called "Luku Luku" for an education project it was running in the country.

Ogbuagu had been working with VSO as a volunteer when the group found out he was into games. "I met British colleagues who liked to play card games. I became inspired by their games and wanted to make something like that in Nigeria," he says.

Since making Luku Luku for VSO, Ogbuagu says NIBCARD has created at least two dozen tabletop games for sale across the country and received grants from organizations including the UN's International Organization for Migration (IOM).

"With the (IOM) grant, we were supposed to, in an artistic way, create an activity that will create awareness on migration," Ogbuagu says. To achieve this, he created a tile-placement game called "My World Trip."

"The game has maps of different countries and the names and continent of the countries," he explains. "As players are jumping from country to country trying to win the game, they are forced to learn new countries that they probably have never heard of."

According to a report in Dicebreaker, a publication focused on tabletop games, the 2020 Covid-19 lockdown period renewed interest in games and increased the sales of board games in places like the US and UK.

In the same year, tabletop games successfully raised $236.6 million on Kickstarter, accounting for nearly a third of all the money made on the crowd-sourcing platform in 2020.

But in Nigeria, there is hardly any data about the tabletop game industry. While games like chess, Ludo, and Scrabble are popular, the local sector is still largely untapped.

Ogbuagu says one of the reasons the industry is struggling is because there aren't a lot of board and card games designed and produced in the country.

"Many Nigerians don't have access to information about where to get games made in the country. There is also no access to tabletop games cafes and other value chains surrounding these games," he explains.
It is difficult for the average Nigerian to find information about games, he adds: "People will most likely know where to find Scrabble or chess than where to find their local, made-in-Nigeria games."

In 2019, as a way of increasing that awareness, Ogbuagu opened a cafe in Abuja.

"The cafe is just a space filled with games. People can come there to play," he says, with 60 Nigerian-made board games and another 300 non-Nigerian games. "Not all the games there are made by NIBCARD," he adds. "We stock games from other people too."

In the next couple of years, another goal is to get more people to appreciate and access locally made games, which starts with visibility.

He says he is currently in talks with filmmakers from the country, encouraging them to swap games such as chess in their movies for Nigerian games like the ones NIBCARD produces.

He's also trying to reach the next generation of tabletop gamers, with "volunteers that take our games to different schools across the country," Ogbuagu says. "They teach children to play these games so that as they are growing up, they know that we have our own Nigerian games."