Arrests made in student killings 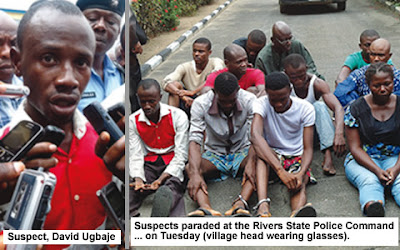 The police on Tuesday announced a major breakthrough in their investigation into the lynching of four University of Port Harcourt students. The videotaped lynching of the students sparked outrage nationwide and the clip of the killings went viral on the Internet.

The IG disclosed the arrest during a security meeting with Chief Executive Officers and security officers of banks at the Force Headquarters, Abuja.

“I want to announce that we have made a breakthrough in the Aluu killings. The two main suspects in the case have been arrested and they will be prosecuted,” he said. The arrest brings the number of suspects arrested by the police to 23.

The students were set upon by a mob in Aluu, a community close to the university, and lynched. They were later identified as 19-year-old Lloyd Toku ( 200 level Civil Engineering); 18-year-old Ugonna Obuzor (200 level Geology student); 20-year-old Chiadika Biringa, (200 level Theatre Arts student); and Tekena Erikena, a 20-year-old a diploma (Technical) student by the management of the university.

The police, on Monday, had named Coxson Lucky, alias Bright, as the mastermind of the lynching. Lucky, who was said to owe one of the students an undisclosed sum of money, reportedly raised the alarm that the students were robbers when they went to his house to demand for the money. The mob, which converged on the venue of the altercation, then beat and burn the students to death.

“It is not the philosophy of the Inspector General of Police to parade suspects. Nonetheless, the gruesome manner in which the crime was committed coupled with the direct and glaring involvement of some of these suspects, and the interest generated by the heinous crime, left the police with no option than to parade them,” Ndabawa said.

He said that an investigation aimed at arresting others involved in the killing of the four students and bringing them to book was ongoing.

However, two of the suspects, who admitted taking part in the mob action, claimed that their involvement was “minimal”. While the first suspect, David Chinasa Ugbaje, said he only hit the students twice, another suspect, Ikechukwu Loius Amadi, claimed that he only beat the students once with a small stick.

Ugbaje, who said he was a cobbler, described one of the students as his customer.

He said, “Around 7am on that day, I saw a crowd beating four boys. I asked who the four men were and they (crowd) said they were armed robbers.

“So, along the line, we went there. I opened the gate and they entered. I could not control the crowd. They pointed at one of our co-tenants; the name of the person is Bright.

“Some people said they wanted to break Bright’s door. So, they started beating the boys very seriously. They took them out from my street. I now left the house. I only beat them twice.”

Ugbaje added that while one policeman at the scene of the incident pleaded with the mob to hand over the students to them, another beat the students.

The second suspect, Ikechukwu Louis Amadi, a printer whose business is located within the UNIPORT campus, said that he only hit Toku, Obuzo, Biringa and Erikena once.

He said, “I was ready to go to my work. When I came out to pick a bike, I saw a crowd. I saw four boys, they were already naked. I shifted a bit to verify. They told me that these four boys came to rob, to steal.

But Segun Lawal, the third suspect, said he did not take part in the beating. He claimed he raised his hands and appealed to the mob not to kill the students. Lawal, a taxi driver, explained that he was arrested after his return from a business trip to Obudu Cattle Ranch on Saturday.

At the parade, the police did not allow journalists to interview the village head of Omuokiri Aluu community, Alhaji Hassan Walewa.

However, Abubakar had said that “Intelligence report implicated the traditional ruler of Omukiri community, Aluu, Alhaji Hassan Walewa, as being the person who incited the mob to unleash terror on the victims.”

On Monday, members of the Aluu community had claimed they had no hand in the killing of the boys. However, Lloyd’s father, Mr. Mike Toku, had described the denial as an attempt to cover up the crime. Toku insisted that his son and the three other students of the UNIPORT were tortured and killed by members of the community.

Toku, on Sunday, told our correspondent that the incident took place in the presence of members of the public and wondered why any Aluu indigene would want to deny the obvious.

He said, “To say they are not involved in the killing of my son is a big lie. It is a white lie and a cover-up for their wicked and unacceptable act. The incident did not take place in one of the community’s bushes.

“They killed my son in a place that looked like a village square, belonging to the community. While the killers were hitting my son and three other students, others stood and watched the incident.”

Toku, who insisted that his son was innocent of any crime, urged the police to arrest the killers of his son and those who watched their torture.

The late Tekena Erikena’s sister, Ann, described her brother as a humble person who had respect for people. Ann wondered why members of the community would brand him a thief and kill him.

“I cannot dictate to government on what it should do, but what we want is justice. My brother was never a thief,” she said.

Related stories: University of Port Harcourt shuts down in protest of student killings
Posted by Naijafeed at 10/17/2012