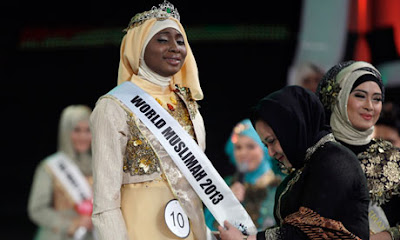 Twenty finalists showed off Islamic fashions and worked to demonstrate religious values during the contest.

The pageant was held before the upcoming Miss World competition, which has drawn protests from hardline Indonesian Muslim groups.

Finalists in World Muslimah were chosen from more than 500 who took part in an online selection process.

One of the rounds involved contenders comparing stories of how they came to wear the hijab (Muslim headscarf) - a requirement for all those taking part.

The finalists hailed from countries including Bangladesh, Iran, Malaysia, Nigeria and Brunei.

In the run-up to the final, contestants underwent three days of "spiritual training", waking before dawn to pray together and to study the Koran.

She had said in an interview before she won that she was just trying "to show the world that Islam is beautiful".

Eka Shanti, who lost her job as a TV news presenter for refusing to remove her headscarf, started the pageant three years ago.

She told Agence France-Presse news agency they held the pageant days before the Miss World final "to show that there are alternative role models for Muslim women".

"But it's about more than Miss World. Muslim women are increasingly working in the entertainment industry in a sexually explicit way, and they become role models, which is a concern," she said.

Indonesia is the world's most populous Islamic country.

The Miss World grand final had been scheduled for 28 September at a venue near Jakarta, but is now being held in Hindu-majority Bali after strong protests by Islamic groups.

Miss World organisers have criticised the Indonesian government for not supporting the event.