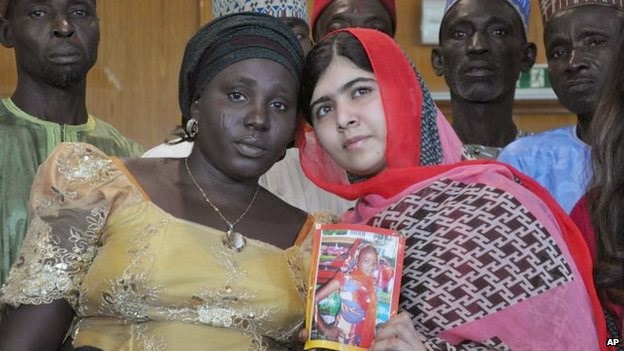 Twelve of them were the parents of girls who were kidnapped three months ago by militant group Boko Haram.

The two others were Malala Yousafzai, a young Pakistani woman just turned 17, and her father Ziauddin.

Malala, thoughtful and self-possessed, explained that she had made the journey to Nigeria from Birmingham in England, where she lives at present, because she regarded the kidnapped girls as her sisters.

"I am going to stand up for them," she said.

Monday has been designated by the United Nations as Malala Day. She has just turned 17, and she decided that she must mark it by coming to Nigeria and appealing for the release of the kidnapped girls and the right of all children here to an education.

'Because we're poor?'
Nigeria, though it recently became the leading economy in Africa, has one of the world's worst records for education. More than 10 million children aged between 6 and 11 - 42% - are not in school. There is a shortage of more than 200,000 primary school teachers.

Malala believes that there is a clear link between poor education and the political violence which the extreme Islamist Boko Haram movement has brought to Nigeria. "If you improve the one, you discourage the other," she has said.

Ziauddin Yousafzai started to explain to the parents how Malala had been shot in the head by a Taliban hitman in Pakistan two years ago, and almost killed. But he couldn't get the words out, and broke down in tears. The 12 Nigerian parents, as they listened to him, wept openly too.

The parents share a powerful feeling that in spite of their loss, they have been shut out and ignored. The government hasn't talked to them at any stage. It hasn't even shown them much sign of sympathy.

Rebecca Samwell, a Christian, said they had heard rumours that some of the girls had been rescued; her missing daughter Sarah is 17, like Malala. "We simply aren't told what the truth is."

One of the fathers, Malla Abu, asked: "Is it because we're poor country people that the government isn't doing anything? Suppose these were the daughters of someone important; would they still be in the forest after 90 days?"

Deadlock and despair
In the hotel grounds, Malala met five girls who were kidnapped with the others in the town of Chibok, but managed to escape by jumping out of the trucks which were taking them to captivity in the Sambisa forest, more than 200 miles (320km) away.

Had any of the five girls been interviewed by the Nigerian army for information they might have about their Boko Haram captors? No, they said.

Government officials deny they have been lackadaisical about investigating the kidnappings, and insist that everything is being done to trace the girls and get them back.

But after 90 days it is hard to see what success the authorities have had.

Mike Omeri, the co-ordinator of the government's anti-terror campaign, insists that they know where the girls are and that they are safe.

But the families are deeply worried by Boko Haram threats to marry the girls off to the movement's fighters, against their will. Some are afraid their daughters have been raped.

There seems to be a total stalemate. Boko Haram says it will free the girls in exchange for the release of Boko Haram prisoners from Nigerian jails.

At different times, various figures in the Nigerian government seem to have considered an exchange, but the army, and perhaps Western governments, are opposed to the idea.

The weakness of the Nigerian army in the country's north-east makes it hard to think that the girls can be rescued.

Faced with this deadlock, the parents are close to despair.

In the hotel in Abuja, Malala's father Ziauddin ended the meeting with the parents by saying a prayer:

"O God, accept our tears, accept the tears of these fathers and mothers. O God, empower us to bring the girls back."

And the parents, Christian and Muslim, joined together in saying "Amen".

Related stories: About 60 of the 200 schoolgirls kidnapped escape from Boko Haram