Nigeria comes second in most internet addicted countries in the world

The country most addicted to the Internet is Brazil, according to a new study from business consultancy A.T. Kearney. The study surveyed people who go online at least once a day, and found that 51% of Brazilian Internet users said they were online all day long, while 20% go online more than 10 times a day. This is largely due to access to smartphones; the country has the second highest smartphone penetration in South America.

Unsurprisingly, most of those who spend the most time online are young (53% were aged 16-35) and unmarried (also 53%). And a lot of Internet use is driven by social networking: In Brazil, those surveyed spend 58% of their time online on social networking sites—more than in any other country.

Nigeria and South Africa, where 66% and 61% of survey respondents respectively go online at least once an hour, come in second and third for heavy Internet use. Their rates are nearly double that of China, where only 36% of respondents reported hourly use. 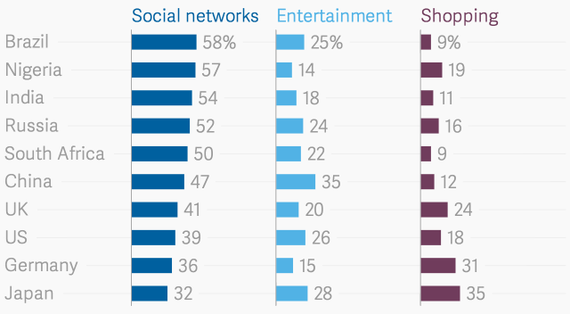