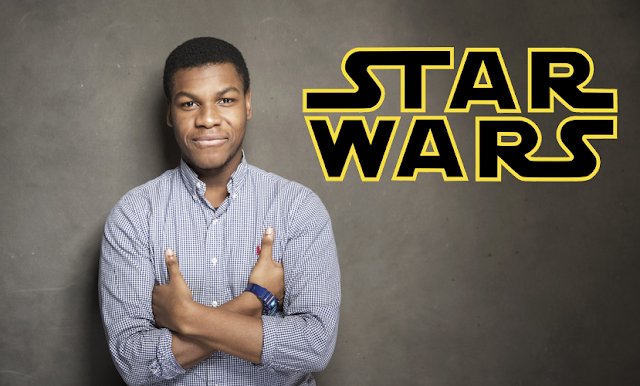 John Boyega has risen to fame by reason of his acting talent and a will to succeed — shooting as far as the biggest roles in Hollywood.

This came after another Nigerian, David Oyelowo, featured prominently in the 2014 Selma, a chronicle of Martin Luther King’s campaign to secure equal voting rights through an epic march from Selma to Montgomery, Alabama in 1965.

Defying the odds in a notorious Peckham neighbourhood in England, Boyega, 22, would be playing a lead role in one of Hollywood’s biggest blockbuster films, Star Wars Episode VII: The Force Awakens.

He had featured in a number of movies, including Attack The Block, The Whale, Imperial Dreams, the film adaptation of Chimamanda Adichie’s Half of a Yellow Sun as well as popular TV series 24: Live Another Day.

But Boyega’s story tells of a life pitched with the harshest of conditions in Peckham, a rough area, where surviving as a young Nigerian was difficult. The area has remained a black spot in the minds of Nigerians living in the United Kingdom since 2000 when 10-year-old Abimbola Taylor was stabbed to death in the neighbourhood.

Boyega was born to Nigerian parents in Peckham, where “gangs, guns and knives were part of everyday life.

“To us that was normal; it was just how we grew up,” a friend who was raised on the same estate as Boyega and his two older sisters, Grace and Blessing, told The Daily Telegraph.

“But theatre kept John out of trouble completely. The theatre was his second home, it was the only place I saw him,” he continued.

Damilola was about the same age as Boyega when he was discovered bleeding to death in a stairwell of North Peckham Estate, just before his 11th birthday.

He had left Nigeria with his parents for England, where his sister was to seek medical care for epilepsy. The trial of his murderers lasted almost 10 years, with two brothers eventually convicted of the crime and sentenced to eight years in prison.

Another Nigerian, Samuel Ogunro, when he was 17, was found shot in the back of the head in a burning car in Peckham in 2010. His murder allegedly had been ‘arranged’ by a South London gang member, who was in prison at the time.

Boyega’s friend said that “not a lot of people knew” about Boyega’s acting because he kept it quiet.

“Everyone else does football when they’re young,” he explained to the newspaper, adding: “John didn’t play football, he was more interested in acting, so he didn’t want to make a big fuss about it.”

He noted: “It was a rough area but he had a nice family, I saw him going to church with them every Sunday.”

Another friend, 22-year-old Daniel Ross, said that the area had been “very, very violent” when he and Boyega were teenagers.

“There were drugs, stabbing, a lot of gang affiliation. You would never see John on the street or hanging around gangs though. I only saw him in church or in acting school,” he stressed.

Demi Rump, 22, was a close friend of Boyega’s during their school years. He went to Westminster City School while she attended a girls’ school next door.

“A lot of boys in his year are now in prison or dead. Everyone was going down one route towards the end of school – taking drugs, selling drugs, gangs, that sort of thing – but John went down another. I am so thankful he got out of it,” she said.

Boyega found solace in Theatre Peckham, a performing arts centre on the corner of his Fifties Estate.

Teresa Early, the theatre’s artistic director, recalled the first time she saw Boyega act, aged nine, in a play at Oliver Goldsmith Primary School, saying she knew he was talented at the time.

She invited Boyega to join the theatre school, a special programme for talented children aged nine to 14, and, after securing financial assistance from a hardship fund, he enrolled.

Boyega spent almost every day after school at the theatre, as well as weekends, Mrs. Early told The Daily Telegraph. “He was (at the theatre) 24/7, it was what he thrived on. His father was a preacher and he wanted him to be a preacher too,” she said.

His father, Samson, mother, Abigail and Blessing are all trustees at the Wall of Praise Christian Centre in South Bermondsey.

Ms. Early said: “I had a chat with John’s father when he was about 12 or 13. As long as John stayed out of trouble they were quite happy. And as John made his way, his father began to think there was some wisdom in it.”

At 16, Boyega moved to South Thames College to study Performing Arts, and joined the Identity School of Acting in Hackney, which helps aspiring actors from multicultural backgrounds.