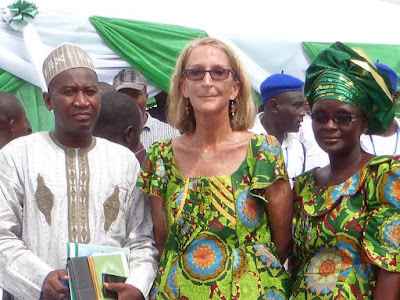 A missionary worker has become the first American hostage kidnapped overseas to be saved under an FBI rule change which allows families to make ransom payments.

The family of Reverend Phyllis Sortor, from Seattle, Washington, have revealed they paid to secure her release after she was abducted from a church compound in Emiroro, Nigeria.

They received around-the-clock guidance from federal agents under a newly changed hostage-response policy before she was freed in March.

It comes after President Barack Obama pledged that families would not be prosecuted for paying ransoms to kidnappers.

The 72-year-old Free Methodist missionary was kidnapped in Kogi State in February but released 12 days later on a trail leading to the city of Lokoja - just hours after her ransom was paid.

At the time, it was reported that her captors were demanding $300,000 - but the family said they parted with a lot less for her release.

Obama said Wednesday that U.S. government officials can communicate directly with militants and help families negotiate for the release of hostages.

Sortor's sister and a senior church official said they were shepherded through the hostage-response process, but not the ransom negotiation, by Federal Bureau of Investigation and State Department officials in a process aligned with the new policy.

'At some point they said, "you know you are the first case after a change has been put in place,'' her sister Jo Lewis said in Washington state.

'They said it was either in process or had been changed and we were the first case that was experiencing this new change.'

The new approach was drawn up over six months after complaints by families that their efforts to free relatives had been discouraged and sometimes blocked by officials who threatened legal action if they raised a ransom privately.

It allows 'communication with hostage takers by our government, the families of hostages or third parties who help these families,' Obama said.

The FBI declined to comment. The State Department did not immediately respond to a request for comment.

They said federal officials monitored the process, but left the ransom wrangling to an outside negotiator, and provided frequent updates.

The officials joined conference calls, one with more than 100 participants and half a dozen federal agents in her living room, Lewis said, adding one agent offered to spend the night.

'They didn't give us monetary support, but they were here in force nearly every day, holding our hands, figuratively, and telling us what we might expect and how to react to different situations,' Lewis said. 'But they did not tell me what to do.'

Lewis and Kendall declined to say how much they paid to secure her sister's release, but said it was much less than the $300,000 initially sought by the captors. Donations came from across the country.

Sortor is currently back working as a missionary in Nigeria, guarded by security, Lewis said.

Lewis said getting access to information made her 'much calmer,' but expressed concern about what the policy shift might mean for the more than 30 Americans the White House says are now being held against their will abroad.

'I have some hesitations because I am afraid that people in other countries will see this as an easy source of money,' Lewis said. 'Perhaps there will be an uptick in kidnappings.'