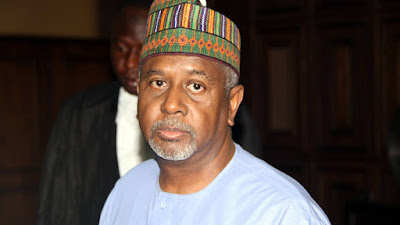 Mr Dasuki is accused of awarding phantom contracts to buy 12 helicopters, four fighter jets and ammunition. He denies the allegations.

The equipment was meant for the fight against Boko Haram Islamist militants.

Mr Dasuki was picked up early in the morning by security agents, a PR firm representing him said.

Two weeks ago, President Muhammadu Buhari ordered Mr Dasuki's arrest after he was indicted by a panel investigating the procurement of arms under the last administration of President Goodluck Jonathan.

PRNigeria said he was picked up by intelligence agents from his home in the capital, Abuja, where he was already under house arrest facing separate charges.

His arrest follows those of some of his associates by Nigeria's Economic and Financial Crimes Commission (EFCC) on Monday.

The anti-corruption body said they included former Minister of State for Finance Bashir Yuguda and the sons of some prominent politicians of the former ruling party over allegations of impropriety in relation to the arms deal.

Earlier, Mr Dasuki said he had not been given a chance to defend himself before the investigative panel and described its recommendation as "politically motivated".

He is the first senior official of the former government to be charged under the rule of President Muhammadu Buhari, who took in office in May.

Boko Haram has killed thousands in north-eastern Nigeria in its six-year campaign to create an Islamic state.