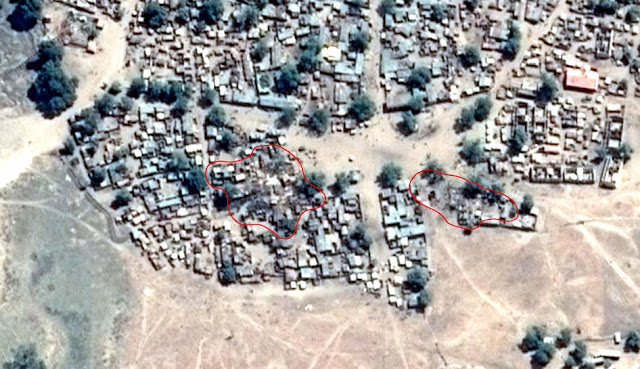 Nigerian authorities should conduct a prompt, thorough, and impartial investigation into the January 17, 2017 airstrikes that hit a settlement for displaced people who had fled Boko Haram, killing at least 70 people, including nine aid workers, and wounding at least 120, Human Rights Watch said today. The government, which has stated that the Nigerian air force accidentally carried out the strikes, should compensate those who were injured and the families of those killed as a result of any violation of international humanitarian law or the right to life.

Human Rights Watch reviewed satellite imagery in the town of Rann, Kala Balge Borno State, recorded on the morning after the attack and identified two distinct areas of destruction in densely populated areas on the western side of the town that are consistent with the detonation of multiple air-dropped munitions. At least 35 structures were destroyed in the attack, including shelters for displaced people.

“The Nigerian military has taken an important and rare step in accepting responsibility for this horrible attack,” said Mausi Segun, senior Nigeria researcher at Human Rights Watch. “Now it should go further by explaining how it came to attack a displacement settlement, and by compensating the wounded and relatives of those who lost their lives.”

Although there is no clearly delineated displacement camp in Rann, the town includes hundreds of tents for displaced people located among residential buildings at the two sites that were hit. The tents are easily visible from the air, making it difficult to understand how an accident of this nature could have occurred. The presence of what appears to be a large Nigerian military compound on the edge of town, 100 meters from one of the impact sites, raises further questions, as the military would have been expected to know that the area was filled with civilians and to take adequate precautions not to harm them during any operation targeting Boko Haram fighters who might have been in the area.

Even if Boko Haram fighters were present in or near the settlement at the time, the Nigerian military should have ensured all of their attacks were targeting military objectives, and that they took all feasible precautions to minimize harm to civilians, Human Rights Watch said.

The investigation should determine the causes of the attack and the military should make the necessary changes, including in its planning of operations to minimize the risk of similar attacks in the future, Human Rights Watch said.

According to the Nigeria Air Force, one of its fighter jets launched an “accidental air strike” during operations in pursuit of Boko Haram fighters. The commander of the military’s counterinsurgency operations in the northeast, Major General Lucky Irabor, told media that he ordered the mission because Boko Haram fighters were gathering in the area. Two soldiers were also wounded, and an investigation would take place, he said, but it is not clear by whom and in what time frame.

Aid groups reported earlier that the area has been inaccessible to aid agencies until recently due to fighting, and the military was in charge of delivering aid to displaced people. A firefight between the military and Boko Haram fighters in Rann on December 30, 2016 might have contributed to the apparent haste with which Major General Irabor ordered the airstrikes to deal with an alleged report of the rebel group’s gathering in the area.

Among those killed were nine people working for humanitarian organizations. The head of emergencies at Doctors Without Borders, which has worked in Nigeria since 1971, told media that the army had full control of the Rann at the time of the attack, including checking those who came in and out. The organization strongly condemned the attack, in which it said three workers of a Cameroonian company it had contracted to provide services were killed.

The Nigerian Red Cross Society said that six of its staff and volunteers providing humanitarian services to displaced people were killed and another 13 were injured.

The tragic incident is not the first military airstrike that apparently killed civilians during the fight against Boko Haram. On February 28, 2014, a Nigeria military aircraft dropped munitions on Daglun, a Borno village, killing 20 civilians, mostly older residents, according to media reports. On March 16, 2014, a similar military attack on Kayamla village, less than 10 kilometers outside Maiduguri, reportedly killed 10 civilians. Media reports quoted villagers there as saying they had told security forces about the presence of some suspected Boko Haram fighters near the village, but the airstrike came days later, after the insurgents had abandoned the area. In both attacks, the military denied knowledge of civilian casualties.

On January 16, 2017, the United Nations estimated that 2.4 million Nigerians had been displaced in their country as a result of Boko Haram’s abuses and Nigerian military operations.

Even if there is no evidence that the airstrikes were a deliberate attack on the Rann displaced persons’ settlement, which would be a war crime, the bombing, apparently not being directed at a specific military target, would be indiscriminate, therefore violating international humanitarian law. The attack would also appear to have violated the right to life under the African Charter on Human and Peoples’ Rights and other international human rights laws applicable in Nigeria, including if those planning the operation did not take sufficient steps to minimize the risk to civilian lives. Nigeria has an obligation under international law to ensure transparent and independent investigations into the apparent violations, and to pay compensation to the victims and their families for the injury caused by any violation.

“Authorities should ensure effective and speedy medical treatment for the injured victims of this unfortunate incident,” Segun said. “And they should ensure prompt, adequate and effective compensation for all the victims and their families of any violations of international law.”