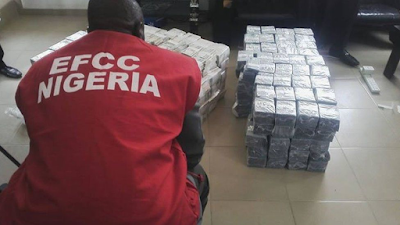 Large sacks containing bundles of "crispy" banknotes worth a total of $155,000 (£130,000) have been seized at a Nigerian airport, officials say.

The cash, in the local naira currency, was found near Kaduna airport's check-in and was still in sealed packs.

An investigation is under way to trace the source of the cash, a spokesman for Nigeria's Economic and Financial Crimes Commission (EFCC) says.

"Operatives [of the EFCC] intercepted a sum of 49m naira in five large black 150kg... sacks following a tip off," the EFCC said on its website.

It added that investigations are "in top gear" to find the "culprits behind the attempted illegal movement of the cash".

EFCC official Ibrahim Bappah said the cash haul, made up of "crispy naira notes", was discovered on Tuesday when airport security detected a distinctive aroma during a routine screening.

It is not known where the cash were being sent, and the EFCC has said it is looking into whether the money is linked to any crime.

The discovery of the money at the airport fits into a pattern of cash being found by the anti-graft team.

In February the EFCC seized nearly $1.75m in cash at a house belonging to the former boss of the country's giant oil firm.

In another case, a corruption-related probe against the former minister of petroleum, Diezani Alison-Madueke, resulted in a federal high court directing the confiscation of $150m.

Last year, the commission recovered some cash stashed away in a hole dug at the house of ex-air force chief, Marshal Adesola Amosu.

In this case, Nigerians are very keen to know who left the bundles of crispy notes and what they planned to do with the cash.