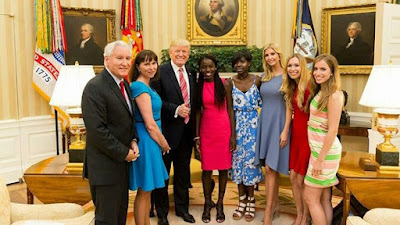 The U.S. President, Donald Trump, and his daughter, Ivanka, met with two Chibok girls, Joy Bishara and Lydia Pogu on June 27 at the White House.

The incident sparked global outrage with a campaign hashtag of #bringbackourgirls calling for rescue of the girls.

Majority of the girls have since been freed by the terror group in prisoner swaps with the Nigerian government, although dozens still remain with the Boko Haram.

With the assistance of the Jubilee Campaign, a human rights group in Virginia, the pair relocated to the United States in August 2014. They then transferred to Canyonville Christian Academy in the state of Oregon, where they graduated.

"It's a wonderful school, I enjoyed my senior year because of the wonderful combination of different countries," said Bishara on her Facebook page.

The pair will attend Southeastern University on a full scholarship at the beginning of the upcoming school year.