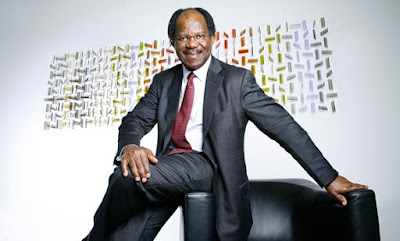 Nigerian born international CEO, Adebayo Ogunlesi has now ceased to be an adviser to embattled US President Donald Trump. Trump sacked him today along with other distinguished CEOs counselling him via two councils on how to “Make America Great Again”.

Trump sacked Ogunlesi on Twitter, when he announced the dissolution of two business advisory councils, in one fell swoop.

Ogunlesi was a member of Strategic and Policy Forum, one of the two disbanded by the unpredictable president. The other group was the Manufacturing Jobs Initiative Council. Ogunlesi, heads Global Infrastructure Partners, a private equity firm and one of Fortune 500 companies. He was the only African on the panel.

The New York Times reported before Trump’s tweeted dissolution, that members of Ogunlesi’s panel were debating dissolving the body entirely as Trump wallowed deeper into bigotry quagmire. But Trump preempted their move. “Corporate leaders had hoped that President Trump would help businesses by slashing taxes and gutting regulations.

It is not clear how much he will deliver on that score. On top of that, he is putting many chief executives in the position of answering for a president with an unparalleled track record of outraging people, most recently at a contentious press conference on Tuesday when he drew a false equivalence between the white supremacists who protested in Charlottesville, Va., last weekend and counter-protesters.”, NYT reported. Trump had earned rebuke and isolation from business leaders for supporting racial bigotry, White Supremacists and the KKK, following his remarks that failed to blame the tragic violence in Charlottesville, Virginia on the group. Instead, he blamed all the sides and the group that challenged the racists.

The leaders of three companies — Kenneth Frazier of Merck, Kevin Plank of Under Armour and Brian Krzanich of Intel — were the first to resign from the Manufacturing Jobs Initiative Council. They resigned on Monday because Mr. Trump was slow to condemn the white supremacists during the weekend and blamed “many sides” for the violence.

When Trump moderated his tone on Monday by saying “racism is evil” and condemning neo-Nazis, he did not assuage some of the CEOs working with him. Scott Paul, the president of the Alliance for American Manufacturing, an organization backed by the steel industry and the United Steelworkers resigned. he was followed on Tuesday by Richard Trumka and Thea Lee, the president and deputy chief of staff for the union group A.F.L.-C.I.O.. The latter’s resignation followed Trump’s reversed position at a press conference at Trump Tower in New York, in which he said that “not all of those people were neo-Nazis, believe me,” referring to the white nationalists who were chanting “Jews will not replace us” as they marched with tiki-torches.

Ogunlesi’s Strategic Forum, composed some of America’s most highly respected and successful business leaders. Members of the body were expected to meet with Trump frequently to share their specific experience and knowledge as the president implements his plan to bring back jobs and “Make America Great Again. ”

Apart from being managing partner of Global Infrastructure Partners, Ogunlesi also serves on the boards of Callaway Golf Co. and Kosmos Energy Ltd. At the same time he’s the chairman of Africa Finance Corp. and serves on the boards of various not-for-profits ranging from New York Presbyterian Hospital to the NAACP Legal Defense and Educational Fund, Inc.