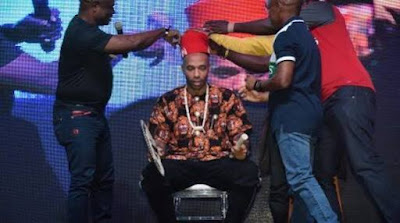 Former Arsenal and France international striker Thierry Henry who is in Lagos for the Guinness Made of Black programme has been crowned the, Igwe of football’ in Nigeria.

Henry who is in Lagos to meet the ‘Be a Front Row Fan’ winners; a consumer promotion of the company also watched the West Brom v Manchester United EPL game at Landmark Event Centre, Victoria Island, Lagos. Aside receiving the ‘igwe of football’ title, Henry also participated in the cooking of Jollof rice. The 40-year-old Frenchman retired from football in 2014.