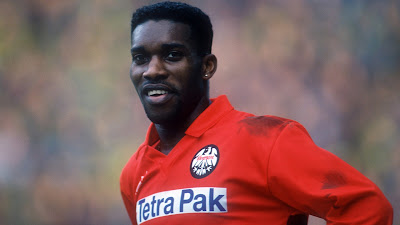 Former Super Eagles and Eintracht Frankfurt midfielder, Austin Jay-Jay Okocha has been named as one of the German Bundesliga legends as confirmed on the German league's official website.

The Nigerian joins Ghana legend and CAF deputy general secretary, Anthony Baffoe, in the 11-man legends network that will be flying the Bundesliga flag across the world.

"His sublime skills and tremendous tricks brought joy to fans of Eintracht Frankfurt and lit up Germany's top division for many years, and now it has been announced that footballing icon Jay-Jay Okocha is the latest star to join the Bundesliga Legends Network.

"The newest member of an elite group of former playing greats to become part of the illustrious Bundesliga Legends Network, Okocha set Germany's playing fields alight between 1992 and '96 when the Nigerian ace scored 18 goals and provided 13 assists in 90 memorable matches for the team known as The Eagles.

"Never to be forgotten among the sides he has represented, it is with warmth and delight that this footballing artist is remembered among the denizens of Eintracht while followers of the Bundesliga will forever continue to delight in the legend that is Jay-Jay Okocha. Welcome to the Bundesliga Legends Network," a Bundesliga statement reads.

The Bundesliga was bewildered by the quick feet, spellbinding step-overs, dream-like dribbles and eye-catching creativity of one of the developing stars, and characters, of the world game.

On August 31, 1993, Okocha combined all of the above traits to score one sensational goal that had beaten goalkeeper Oliver Kahn tweeting over 20 years later, "I'm still dizzy," even now.

Bundesliga giant Kahn entered folkloric status at Bayern Munich, but it was while at Karlsruhe that the highly decorated shot-stopper faced his Nigerian nemesis on a night when he, and several defenders, were left with a sense of motion sickness following Okocha's jaw-dropping exploits.

Following his spell in Germany, the attacking midfielder took his skills to Turkish team Fenerbahce, Paris Saint-German and Bolton Wanderers, among others.