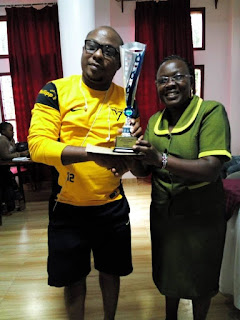 Just as the Super Falcons overcame South Africa to win the Africa Women Cup of Nations football title in Ghana on Saturday, Nigeria’s Scrabble national team captain, Moses Peter, also emerged the new Africa Scrabble Champion in the 13th edition of the championship held at the Resort Centre, Kiriyangi, Kenya at the weekend.

The Africa tournament, which featured seven countries that included Nigeria, Uganda, Sierra Leone, Gambia, Tanzania, Kenya and Zambia with 62 players in attendance, saw Nigeria once again stamping its feet at the African scrabble scene by retaining both the individual and country titles for the 12th time.

Peter proved beyond reasonable doubt that he was the world second best player and Africa’s number one scrabble player when he defeated his opponents after game 30 of the just concluded Africa Scrabble Championship.

The national scrabble coach, Anthoney Ikolo, commended the 11 players that took part in the Africa championship and for giving their best and flying high the nation’s flag in Kenya.

He noted that the country’s representatives would not relent in dominating the continent in the game scrabble in Africa, adding that Nigeria’s success in the East Africa country could be attributed to hard work and determination to succeed by the players.