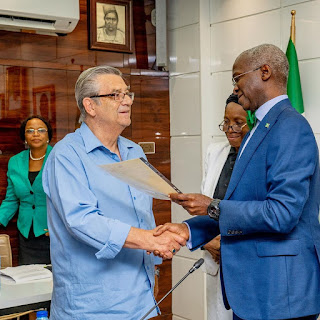 Former Nigeria coach Clemens Westerhof has been rewarded with the house he was promised 25 years ago for winning the 1994 Africa Cup of Nations.

The Dutchman was in charge for five years from 1989 and as well as the Nations Cup victory he led them to their first World Cup in the same year.

Then Nigerian military ruler Sani Abacha promised a house to reward each of the squad members and officials, but only a handful received theirs.

"It's taken a long go-slow, but I feel happy that my second country has fulfilled its promise to me," the 79-year-old said.

"I always say Nigeria gave me everything as a man and in football. You can see that I wasn't wrong. I thank everyone involved in making this happen."

Nigeria's Minister of Power, Works and Housing, Babatunde Raji Fashola, made the document presentation on behalf of the presidency.

Fashola also asked the Nigeria Football Federation (NFF) to provide him with the names of those who are yet to receive their houses.

"We've asked the NFF for their names to enable us process it so they can all be rewarded," Fashola said.

Westerhof, who is also the longest-serving manager in the history of Nigerian football, has also coached in the Netherlands, South Africa, Egypt and Zimbabwe.

In his spell in charge of Nigeria the outspoken Dutchman led the country to fifth place in the Fifa world ranking in 1994 - the continent's ever highest - and also completed the haul of African football success with the West African nation.

He led the country to a runners-up finish at the 1990 Africa Cup of Nations, third place in the 1992 edition before conquering the continent in 1994.

He is still revered in Nigeria where he is credited for masterminding the Super Eagles' success in the 1990's and he made an attempt to return in 2016.

It is the second time Nigeria president Muhammadu Buhari has made good on a promise to reward the country's football success.

In February 2016, Buhari fulfilled a pledge to reward the Nigeria squad that won the first Under-16 World championship after a 30-year wait.