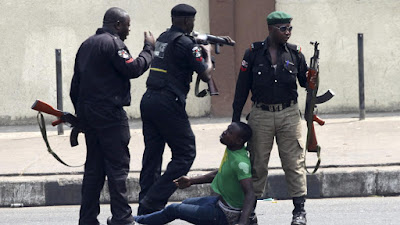 It seems in the eyes of Nigeria’s police, any young man with a laptop, smartphone and an internet connection is likely a fraudster.

Such profiling has no bearing in reality, of course. It’s simply a crude extortion tactic that has fueled a long-running racket. Here’s how it often goes: the young person is stopped on suspicion, then arrested and detained followed up being hit with bogus accusations of being an internet fraudster. In those circumstances, the options are usually paying bribes to regain freedom or facing an uncertain future decided by Nigeria’s broken criminal justice system which has left 72% of prison inmates serving time without a sentence.

Given the nature of their work, Nigerian techies are frequent targets of this scam by the police’s anti-robbery squad (SARS), a special unit which is has garnered a reputation for arbitrary arrests, torture and extra-judicial killings. But, following the recent harrowing experience of a local software engineer who arrested by SARS and asked to pay a $1,300 bribe, leaders in Nigeria’s tech industry are crowdfunding a legal effort against the unit. His story which has been retweeted over 11,000 times and infuriated the local tech industry which has long protested harassment of its workers.

Startup founders and employees across the country have contributed $30,000 to the campaign within a day of its launch. Flutterwave, a Nigerian fintech giant, has provided a payments solution for the campaign with Olugbenga Agboola, Flutterwave CEO says the company is waiving regular charges on the payments link. Other notable tech founders leading the camapign include Jason Njoku, founder of iROKOtv, Tayo Oviosu, founder of Paga and SIM Shagaya, founder of Konga

The raised funds will go to financing lawsuits as well as supporting existing initiatives against police brutality. The campaign will work with civil society groups and activists with a track record of fighting police brutality and extortion.

Bosun Tijani, co-founder of Co-Creation Hub, Nigeria’s leading tech hub, is among those leading the campaign and says harassment by SARS officers will result in increased talent drain with several local developers already opting for careers and lives abroad, away from Nigeria’s dysfunction. Tijani says despite its prevailing rhetoric of supporting the budding tech industry, the government “continues to turn a blind eye to the robbery and psychological intimidation of young tech talent.”

In truth, the profiling of young laptop-carrying Nigerians as fraudsters by the police stems from the country’s much maligned history with internet fraudsters who continue to evolve while carrying out million-dollar scams. However, in targeting young techies, the police are inadvertently hitting at a group of Nigerians who are perhaps doing the most to correct the narrative of online fraud.

So far, much of the tech industry’s efforts have been rewarded: Nigeria’s ecosystem has morphed into one of Africa’s most valuableover the past decade with tech companies founded, led and staffed by young people offering innovative solutions to several of the country’s problems across financial inclusion, agriculture and healthcare.

It’s not the first time SARS has been subject of a widespread campaign against its excesses. A 2017 #EndSARS campaign led by young Nigerians on social media resulted in the announcement of a revamp of the unit. However, as stories of sustained harassment show, very little has changed. Any sustainable reforms to Nigeria’s police will likely be slow-growing given its entrenched problems: a survey by Nigeria’s statistics bureau showed police officers were the most likely of all civil servants to solicit and collect bribes while a 2016 security index ranked Nigeria’s police force ranks as the worst globally.