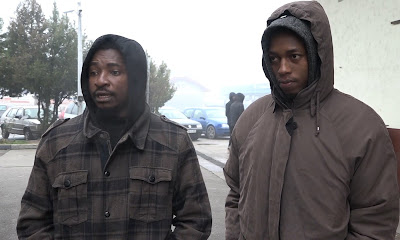 Two Nigerian student table tennis players are begging authorities in Sarajevo to return them to their home country after they were wrongly deported to Bosnia by Croatian police, who mistook them for undocumented migrants.

In an interview with the Guardian, Abia Uchenna Alexandro and Eboh Kenneth Chinedu said they were victims of injustice and that the only reason they were forcibly taken to Bosnia is that they are black.

“We hold the truth and we have evidence of it,” said Chinedu via telephone from an immigration centre in east Sarajevo where the pair are detained. Uchenna and Chinedu, students at the Federal University of Technology Owerri in Nigeria, arrived in Croatia with a regular visa on 12 November, on their way to participate in the fifth World InterUniversities Championships, held this year in Pula.

The pair, both 18, left Pula for the Croatian capital, Zagreb, after the tournament and were supposed to fly to Lagos on 18 November. “The night before our departure, on the 17th, we checked out from the hostel and went for a walk in Zagreb,” said Chinedu. “Suddenly … we were stopped by the police who asked us for our identification documents. We tried to explain that our passports were in the hostel and that we had a regular visa, but they paid no attention to what we were saying.”

The officers allegedly mistook them for undocumented immigrants, put them in a van and transferred them to the border with Bosnia and Herzegovina where, that day, Croatian authorities had gathered together a group of migrants who were intercepted as they were attempting to cross the country.

“There were men from Pakistan at the border,” said Chinedu. “They had been caught by the Croatians while attempting to cross the border from Bosnia. Police eventually ordered us to move through the woods. I refused and begged them one more time to check our status, but they wouldn’t listen. They kicked me in the back and told me they would shoot me if I didn’t move.”

Uchenna and Chinedu were eventually deported to Bosnia and ended up in a camp in Velika Kladuša, where thousands of migrants live in cramped tents without water or heating, and with temperatures as low as -2C.

The plight of the two students has made the news around the world and sparked a row between Croatia and Bosnia. Last weekend they were transferred to an immigration centre in east Sarajevo.

“Those people are victims of illegal acts on the Croatian side,” Dragan Mektić, Bosnia and Herzegovina’s minister of security, told al-Jazeera. “It is obvious that Croatian police forcibly displaced them.”

Police in Croatia denied any wrongdoing and raised doubts over the table tennis players’ intentions, suggesting they were lying. According to the police, another Nigerian who participated in the championship had attempted to cross the border with Slovenia from Croatia a few days before.

“Police officers have already witnessed cases of individuals who make an attempt, even abusing their participation in sports competitions in Croatia, to remain in the country or continue their journey illegally to other European countries,” Croatian police said.

“This is not true,” said Chinedu. “We were legal in Croatia. And our visa was valid until the 3 December. If we wanted to seek asylum, we could have asked for it because we had visas.”

The interior ministry in Zagreb said the men were stopped by police on 18 November, the day they were due to depart, and not the day before as the Nigerians claimed. However, the police’s version of events does not explain why the officers sent the students to Bosnia, knowing they had entered the country on a flight to Zagreb and not from Bosnia and knowing that they had a valid visa until 3 December.

In the meantime, authorities in Sarajevo are working on the case. The presence of the Nigerians in Bosnia – even if instigated by Croatian police – is technically illegal, given that their visa was valid only in Croatia, and which has now has expired.

Dragan Mektić said: “Respecting legal procedures, we now have to take them back to Croatia. It is obvious that they have Croatian visas, that they are in Bosnia-Herzegovina illegally.”

The Nigerians said they were willing to go back to Croatia, but only on one condition: “If they take us back to Croatia, we want to have UN escorts with us. We will not go to Croatia without a UN representative. We are scared of the Croatian police after what they did to us.”

“We want to go back to Nigeria,” said Chinedu. “Please, help us, send us home immediately.”