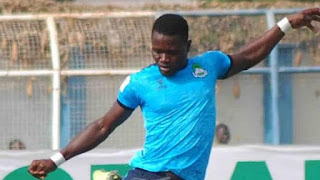 Nigeria's Football Federation (NFF) says medical facilities at all clubs must be checked before matches can go ahead, following the death of a player on Sunday.

Nigerian footballer Chineme Martins, 22, died after collapsing during a game for his club Nasarawa United.

Martins fell unconscious, unopposed, during the second half of Nasarawa's league match against Katsina United.

"The player was attended to by medics of the two clubs ... and was later rushed to Dalhatu-Araf Specialist Hospital in Lafia where he was later pronounced dead," the Nigeria Professional Football League (NPFL) said in a statement.

An autopsy is now being carried out to determine the cause of death.

The NFF says no further matches should be played unless there is a full complement of medical equipment at the stadia and personnel "as provided in the NFF Club Licensing Regulations".

Furthermore, the NFF said all match commissioners and the host FA "are to ensure they inspect all the facilities including carrying out test runs before giving the go-ahead for any match to be played."

Eyewitnesses told BBC Sport there appeared to be a delay in getting Martins to the hospital because of a problem with the ambulance.

Nasarawa United are yet to make any (official) statement about the death of their player who had made four appearances for the northern club so far this season.

Nigeria's sports minister, Sunday Dare, described Martins' death as "regrettably avoidable" and said the "ministry will immediately work with the NPFL to role out mandatory conditions before any match is played".

It is the second time fans in Lafia have witnessed a tragedy. In December 2018, Kano Pillars star Dominic Dukudod collapsed while warming up in a friendly against Nasarawa United themselves.

Questions have previously been raised about the state of medical care and players' welfare in the NPFL, but Nigeria's League Management Company says it mandates the clubs to ensure all players present a medical passport - signed and authorised by a certified doctor - declaring them fit to play.