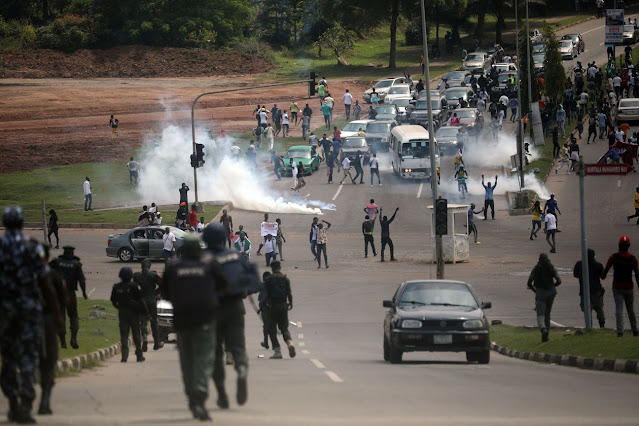 Tens of thousands of protesters brought the largest city in Africa to a standstill on Monday, mounting the biggest demonstration in a two-week campaign against police brutality and escalating a standoff with a government that has pledged to restore order.

Groups of placard-waving protesters blocked major roads across Lagos, Nigeria’s sprawling commercial capital and home to an estimated 20 million people. The city’s Ibadan expressway, the country’s busiest road, was blocked by groups chanting: “We want change.” Protesters closed off the city’s airport and stormed the terminal. In a city infamous for hourslong traffic jams, columns of Lagos residents could be seen walking along emptied streets and causeways.


The Lagos protests were the largest of a series of demonstrations on Monday across the West African nation of 206 million people that appeared to significantly raise the temperature between demonstrators and the government.

Nigeria’s army deployed to several intersections in the capital, Abuja, at sites of a planned protest, while police fired tear gas, days after local authorities issued an executive order banning demonstrations in the city. Over the weekend, Defense Minister Bashir Magashi warned protesters against breaching national security and the information minister, Lai Mohammed, said the government wouldn’t “fold its arms and allow the country to descend into anarchy.”

“I know they will try to bring the military to make us scared,” said Gbenga Abioye, a student taking part in a Lagos protest blocking access to Murtala Muhammed airport, where young people sang with raised fists as the national anthem blared through tinny speakers. “We aren’t going to fight. But we will stay on the streets.”

The escalating rhetoric raises the prospect of a showdown between President Muhammadu Buhari and a protest movement that has evolved from a single-issue campaign into a more diffuse protest against alleged government corruption, economic mismanagement and nepotism.

The protests have flared in a context of profound economic malaise, as a an oil-price crash and the impact of the coronavirus pandemic have slammed Nigeria’s economy, which is failing to keep pace with rapid population growth. More than 55% of Nigerians are underemployed or unemployed and youth unemployment is even higher, according to official statistics. More than 90% of Nigerians work in the informal sector, meaning the government’s lockdown of major cities to slow the spread of the new coronavirus deprived tens of millions of people of the cash they need to survive.

Mr. Buhari, a former general who briefly ruled Nigeria at the head of a military junta in the 1980s before returning as elected civilian president in 2015, has deployed the army against other protests in recent years, including in 2018, where government forces killed 45 Shiite Muslims marching to support a jailed cleric. He has urged the protesters to give the government time to address their concerns.

The current protests began with demands to ban a notorious police unit, the Special Anti-Robbery Squad, or SARS, which was long accused of extortion, torture and extrajudicial killings. The largely peaceful protests, organized under the hashtag #EndSARS, won the backing of celebrities and business leaders around the world, including the rapper Kanye West and Twitter Chief Executive Officer Jack Dorsey, who urged people to support protesters by donating bitcoin.

Nigerian diaspora communities in the U.S. and Europe have attended street protests in solidarity with a movement that has sought to bridge the country’s traditional sectarian and economic divides.

“This protest is different because it is the first time Nigerians are speaking with one voice and the government cannot find anything to divide us,” said Chalse Inoji, a popular Nigerian comedy actor, who was marching wrapped in a Nigerian flag. “EndSARS is a rallying point for all of the years of bad governance, maladministration and institutional highhandedness. We are asking for a total reformation of our political system.”

Nigeria’s government agreed to disband the police unit and establish a new elite police force—SWAT—whose officers would be trained by the International Committee of the Red Cross. But tensions have continued to rise on the streets across the country, as protesters vow not to withdraw until promises are delivered and the government releases those arrested at the recent demonstrations.

In Edo state, authorities imposed a curfew after hundreds of prisoners escaped from a jail in the melee of protests. Elsewhere, groups of men armed with clubs and bats attacked groups of protesters camped at strategic intersections.

The protests are being driven by the youth in Nigeria, a country with an average age of 18 and one of the world’s fastest-growing populations, projected to overtake the U.S. to become the third-largest by 2050. The demonstrations fit into an emerging global pattern of youth-led calls for change from Hong Kong to Sudan and Chile.

“The current generation of Nigerian youth have paid very little attention to politics to date….That reality is now likely to shift as young protesters grow more conscious of their political power,” she said.

Inside the protest movement, fractures are appearing between those who want to keep the focus on police brutality and those who want more fundamental change.

“The biggest strength of the protests has also become its biggest liability, which is total absence of centralized leadership,” said David Huneydin, a journalist critical of the government who has marched in the protests. “A military intervention is now highly likely.”

The protests were no longer about police brutality and had become political, said a senior Nigerian security official. “This is a platform that is being hijacked by people opposed to the government. It is well funded.”

There were signs that Mr. Buhari’s allies were hardening their position against the protesters. Governors from Nigeria’s majority Muslim north have rejected the total disbandment of SARS, stressing it has been instrumental in fighting the Boko Haram insurgency and should be reformed rather than scrapped.

Nigeria’s army said over the weekend that it would begin a two-month national exercise—Operation Crocodile Smile—the first time the annual exercise, typically concentrated in the oil-producing Delta region, will be nationwide.

As night fell on Monday, thousands of protesters gathered at a bridge toll gate, swaying the lights on their cellphones as musicians sang protest songs through booming speakers. The vast digital advertising banner on the bridge was lit up with the protest slogan “Soro Soke,” or Speak Louder.

Lagos protesters have pledged to continue the citywide shutdown for three days. “These protests are happening in phases and we are not ready to leave the streets anytime soon,” said Uche Nnadi, a 36-year-old Nigerian actor. “We are tired of bad leadership.”

By Joe Parkinson and Gbenga Akingbule