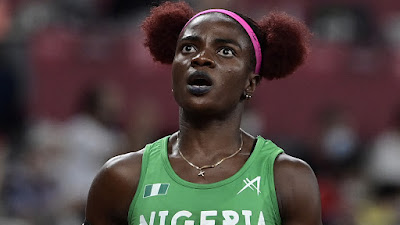 The 25-year-old Amusan first won the title four years ago at the 21st edition of the championship, Asaba 2018. She has now become the third Nigerian after Maria Usifo (1984 and 1985) and Glory Alozie (1996, 1998 and 2000) and fifth African to successfully defend the sprint hurdles title.

The reigning African Games champion was, however, denied the chance to break the 12.77 seconds championship record set by Alozie at the 11th edition of the championship in Dakar, Senegal, in 1998 by an excessive 4.0m/s tail wind.

The story was, however, different for Team Nigeria in the 100m, where the nation failed to win any medal in both the male and female sprint events.

Reigning African Games fastest man, Raymond Ekevwo and home-girl, Tima Godbless, failed in their bid to return Nigeria to reckoning in the men and women’s 100m finals in Mauritius.

The two athletes ran new personal season’s best in all conditions and new personal best respectively in their bid, but ended up with no medal.

Ekevwo ran 10.03 seconds in the men’s race, but ended up in fourth place, thereby extending Nigeria’s wait for the blue ribband event’s crown beyond 12 years after Olusoji Fasuba won in 2008 in Addis Ababa, Ethiopia.

Reigning African 100m record holder, Kenya’s Ferdinand Omanyala and defending champion, Akani Simbine of South Africa, both ran a wind-aided 9.93s, but the former was crowned Africa’s speed king to become the second Kenyan after Joseph Gikinyo in 1990 to win the event.

In the women’s race, Godbless ran an impressive 11.27 seconds, but ended up in fourth place as The Gambia’s Gina Bass won in 11.06s.

Niger’s Aminatou Seyni Moumouni (11.09) and South Africa’s Carina Horn (11.14) came in second and third respectively. This will be the second time in last three editions Nigeria has failed to make the podium in 100m event.

Nigeria was last crowned African champion in the event eight years ago, when Blessing Okagbare ran a then 11.00 seconds championship record to win the country’s 12th blue ribband gold medal in the history of the championship.

Meanwhile, quartermiler, Patience Okon George, qualified for her straight fourth final in the women’s 400m after running 53.24seconds to win her semifinal heat.

The 30-year-old will be hoping to strike gold this time around after winning bronze in 2014, 2016 and return Nigeria as African champion eight years after Folasade Abugan ran 51.21s to win at the 19th edition in Marrakech, Morocco in 2014. The feat made Abugan the seventh Nigerian to win gold in the history of the championship.

In the men’s version, the trio of Sikiru Adeyemi, Nathaniel Samson and Johnson Nnamani failed to advance to the final, thereby, extending Nigeria’s wait to get an African champion 24 years after Clement Chukwu won the gold medal in Dakar, Senegal.