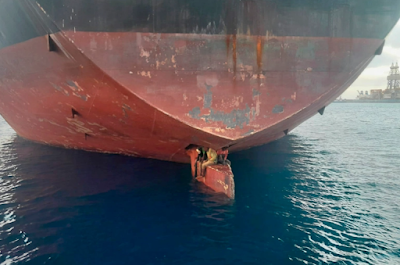 Three stowaways travelling for 11 days on a ship’s rudder were rescued by the Spanish coastguard and hospitalised in the Canary Islands, Spanish authorities have said.

The large ship had departed from Lagos, Nigeria on November 17, according to ship-tracking website Marine Traffic, and the men were rescued on Monday.

Found on the Alithini II oil tanker at the Las Palmas port, the men appeared to have symptoms of dehydration and hypothermia and were transferred to hospitals on the island for medical attention, Spain’s Salvamento Marítimo said.

Throughout the journey, at least three migrants and refugees had been hanging onto the narrow metallic rudder, with their feet dangling just a few feet above the Atlantic Ocean.

In a photograph Spain’s coastguard distributed on Twitter on Monday, the three men are seen perched on the rudder of the oil tanker.

The coastguard said they rescued the stowaways after the tanker had docked.

Though extremely dangerous, it is not the first time stowaways have been found travelling on the rudder of commercial ships to the Canary Islands, which is located around 97km (60 miles) off the coast of Morocco.

In late 2020, Spanish authorities identified six others travelling from Nigeria on the rudders of two tankers.

One of those who arrived in 2020 was a 14-year-old boy who narrated his harrowing two-week journey to the Spanish daily El Pais.

He described how the stowaways had to take turns sleeping because there was enough space for only one person to lie down at a time; how there was a fight and he was nearly thrown off the rudder; how they got cold and wet and it would take hours to dry off; how his urine turned green after drinking seawater.

In a tweet, migration adviser to the Canary Islands, Txema Santana, warned that the most recent arrivals “won’t be the last” and that “stowaways don’t always have the same luck”.

The migration route from West Africa to Spain’s Canary Islands is one of the most dangerous in the world.

In September, Santana estimated that about 1,000 migrants and refugees had died or disappeared trying to reach the Spanish archipelago this year.

As of November 15, nearly 15,000 migrants and refugees have made it to the Canary Islands by sea this year, down 18 percent from the same time in 2021, according to Spain’s Interior Ministry. Most make the long journey from West Africa on small rafts, a growing number of which are inflatable.

Related stories:  2 Stowaways from Nigeria on Ship's rudder to be deported from Spain

Stressed out middle class Nigerians want out of Nigeria