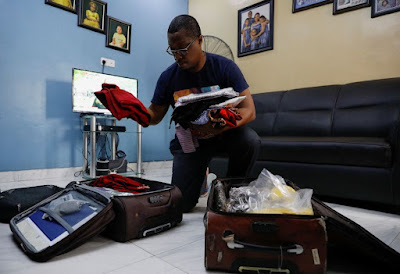 Nnamdi Nwaogu, a 44-year-old IT worker, has packed his bags. In Lagos, Nigeria's frenetic commercial capital, galloping inflation and a plunging naira have pummeled his salary.

Nwaogu, like hundreds of other Nigerians, left amid a brain drain that is punishing even for a nation used to losing its young and educated.

"We have serious doubts if this is the time for that hope to blossom," he said before flying to the UK last month.

Nwaogu began a master's degree in England, while his wife, a doctor, will join him in January with their three children.

Departing workers are impacting nearly every sector, stretching a weak healthcare system, forcing employers to recruit on a continuous basis and worsening services from banking to tech.

The phenomenon -- dubbed "japa," meaning "to flee" in Yoruba -- regularly trends on social media. Many cite unprecedented nationwide insecurity, inflation at a 17-year-high and a loss of faith in leaders before the February 2023 presidential election.

"We are witnessing an epidemic of brain drain," said Dr Dare Godiya Ishaya, president of the Nigerian Association of Resident Doctors (NARD).

Ishaya said comparatively low pay, workplace assaults and lack of safety – 20 NARD members have been kidnapped this year -- were all reasons members left.

A NARD poll showed that nearly 800 resident doctors had left this year, while 85% of its leadership were planning to leave. The result is hours-long waits at hospitals, he said, doctor burnout and deteriorating care.

Real-time nationwide statistics on those leaving are not available. But British government data showed a 300% increase in Nigerians getting UK work visas in the year to June, to 15,772.

Others are going to Canada, Australia and the United States.

The exodus lead a banking industry group to release a study last month on ways to retain workers, while tech firms such as Yellow Card Financial, a cryptocurrency exchange, told Reuters they had started offering stock options and pay in dollars.

"The competition for talent is only going to get more and more intense," said Yellow Card chief executive Chris Maurice.

The pull from countries grappling with their own worker shortages is aiding the exodus.

One Nigerian accountant who moved to the UK in May said it took her just three months to get offers from two of the Big Four accounting firms; her company, she said, recently doubled its referral fee to 1,000.

Lagos-based consultancy SBM warned that the loss of skilled labour was bound to have a negative economic impact.

For Nwaogu, there is no choice.

"I want to be able to give my children a better quality of life," he said. "I can't get that here."

Video - Low wages, and lack of infrastructure leading to a "brain drain" in Nigeria's IT sector