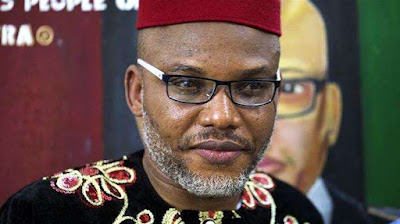 A Nigerian separatist leader accused of terrorism and instigating violence in the country’s southeast was acquitted Thursday by a local court, his lawyer told The Associated Press.

The Nigerian Court of Appeal dismissed the government-filed charges against Nnamdi Kanu in Abuja, the nation’s capital, after a jury faulted the legality of the case against him, according to Ifeanyi Ejiofor, his lawyer. Kanu is yet to be released from custody.

The Indigenous People of Biafra separatist group that Kanu leads has been pressing for the southeast region to break away from the West African nation and become independent. But the Nigerian government said he uses the group known as IPOB to instigate violence, leading to the deaths of many in the country’s southeast.

Kanu had been facing trial for alleged treason and terrorism but escaped Nigeria in 2017 while on bail. He was rearrested in June last year and brought back to Nigeria from an undisclosed country.

The separatist leader, who also holds British citizenship, pleaded not guilty at the resumption of his trial which his group has said is being used to stifle his secessionist campaign. The campaign reminds many of the short-lived Republic of Biafra that fought and lost a civil war from 1967 to 1970 to become independent from Nigeria. An estimated 1 million people died in the war, many of starvation.

After he was acquitted, Emma Powerful, a spokesman for the Biafra group, told the AP, “Our next target is to ensure that Biafra liberation is materialized and no human being can stop it.”

Kanu’s trial reechoed allegations of marginalization in Nigeria’s southeast region made up of the Igbos, Nigeria’s third-largest ethnic group who are mainly Christians. Nigeria’s more than 200 million people are almost evenly divided between Christians and Muslims.

Amid the calls for a referendum, the IPOB secessionist group became more violent, authorities and experts have said. The formation of the Eastern Security Network, its paramilitary arm, in December 2020 coincided with a spike in criminal attacks in the region.