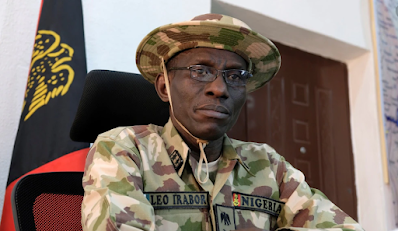 Nigeria's defense chief defended the destruction of a seized ship that was smuggling stolen oil, saying no investigation was needed. Critics say the military's burning of the ship last week destroyed vital evidence and accused the military of a cover-up.

Irabor said the swift response of security operatives followed the rules of engagement and that they didn't need to carry out any investigation because the ship was caught in the act.

The bust was one of the biggest in recent weeks led by a former Delta state militant, Government Ekpemupolo, widely known as Tompolo. Nigerian authorities in August awarded him a multi-billion-dollar surveillance contract in a desperate bid to address rampant oil theft.

"Why the hurry in destroying this vessel?” Abubakar said. “There have been allegations that the menace of oil theft is being perpetrated by persons in authority. The hurried destruction lays credence to that particular allegation."

Experts say Nigeria has been losing thousands of barrels and millions of dollars every day to crude oil theft.

The ex-militant's company has so far uncovered 58 instances of oil being siphoned from pipelines, including one connected to Nigeria's major export line where oil was tapped unnoticed for nine years.

Abuja-based lawyer and economist Eze Onyekpere said the burning of the ship will make any investigation more difficult.

"The destruction of this vessel in open space without appropriate paraphernalia to protect the ozone layer is an injustice the struggles and environmental rights of the Niger Delta people,” Abubakar said.

Critics are waiting for answers and monitoring what authorities do next.