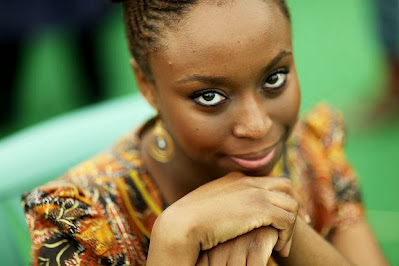 The award ceremony, held at the Sanders Theatre, Memorial Hall at Harvard University campus in Massachusetts, on Thursday, marking a return of the event after a nearly three-year hiatus due to the COVID-19 pandemic.

Introducing Chimamanda as one of the honourees, Tracy Kaysmith, a faculty member in the department of English, African and African American Studies, described her as one of the most celebrated writers of our time.

“Chimamanda is consecrated to the work of the word, which is soul work in a large and cosmic way. You have a vision that is large, but it begins in small intimate particular spaces. It is as attached to the vocabularies of causes as it is to the dialect of the heart, and I believe your work reminds us of what it looks like to look around at the small and vast both in and around us,” she said.

Celebrating her contributions to amplifying the African voice, Kaysmith said: “In her novels, Adichie has brought African voices to the attention of the wider world. She’s cast African immigrants in stories that are once universally resonant and gloriously precise, particular to the world in which they’re born. She is a superstar who is also part of an African literary renaissance in the company of my brilliant colleagues that demand each of us work hard to understand the vast traffic of cultures, beliefs, and identities that swirl around and intersect with our own.”

Listing her immense contributions to the course of gender equality, Kaysmith said: “She became an icon of 21st-century feminism for demanding that if equality is the goal, then we must honestly name one of the very real obstacles to genuine equality.”

Kaysmith thanked Chimamanda for her tremendous literary gifts. “For your fierce commitment to moving humanity beyond the constraints of a single story, single vocabulary, single set of expectations, we recognise you, Chimamanda Ngozi Adichie, with the W.E.B. Du Bois Medal.”

In her acceptance speech, Chimamanda thanked the organisers of the award. She thanked the Hutchins Centre Director, Prof. Henry Louis Gates Jr, calling him an icon for making African American history and literature mainstream and normal as it should be.

Reaffirming her love for writing, Chimamanda said: “Writing is the love of my life, literature has mattered to me for so long, and it’s always so meaningful for me to have my work recognised. The most meaningful thing for me as a writer is to know that I can create something that means something to other people, and so, what moves me the most is to hear from people who have read me say your work made me see, your work made me think differently, your work made me feel that I was not alone.”

In her final remarks to the students, she said: “For the young people who are here, if you care about anything, please care about reading. Reading is so important. Reading is magical, books are magical. I really think that one of the best ways to counter the ugly tsunami of book banning going around in this county is to read. I just want to make a very small suggestion, how about you give up social media for two weeks, three weeks, a month, and read, read, read.”

Reflecting on the choice of this year’s awardees, Gates Jr. said the honourees represent an “unyielding commitment to pushing the boundaries of representation and creating opportunities for advancement and participation for people who have been too often shut out from the great promise of our times.”

Other honourees at the award ceremony included basketball legend, cultural critic and activist, Kareem Abdul-Jabbar, who was recognised for his achievements in his 50 years of basketball career; ground-breaking actress Laverne Cox for her impressive career as a four-time Emmy nominated actress and prominent equal rights advocate; Agnes Gund, President emerita of the Museum of Modern Arts; Raymond J. McGuire, Chairman of the Studio Museum in Harlem and philanthropist; Deval Patrick, 71st governor of Massachusetts and civil rights leader; Betye Saar, artist, on her reflection on African and American identity.

The W.E.B. Du Bois Medal is the highest honour given by Harvard University in the field of African and African American studies. Past recipients include Oprah Winfrey, Maya Angelou, Muhammad Ali, Steven Spielberg, Ava Duvernay, and Chinua Achebe.