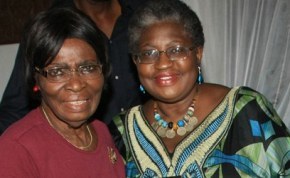 Professor Kamene Okonjo, the mother of Minister of Finance, Dr Ngozi Okonjo-Iweala, who was abducted last Sunday from her home, has been freed.

According to sources, the 82-year old queen is now with security operatives, just as report says Governor Emmanuel Uduaghan is on his way to Ogwashi-Ukwu to receive her.

Vanguard gathered that Dr. Ngozi Okonjo-Iweala has been informed of her release.

The Nigeria army yesterday said soldiers had arrested 63 people in raids conducted during the search for Prof. Okonjo.

Earlier, it had been reported that more than 60 people, including police officers, had been arrested in connection with the kidnapping, for which a ransom of about U.S.1-million had been demanded.

Two police officers arrested for the kidnapping of Okonjo-Iweala's mother