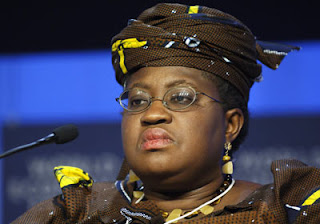 Witnesses have told LEADERSHIP how the octogenarian mother of the minister of finance, Dr. Mrs. Ngozi Okonjo Iweala, was yesterday abducted from the palace of the traditional ruler of Ogwashi-uku, Delta State, Obi Chukwuka Okonjo.

Mrs. Okonjo, 82, the queen mother of Ogwashi Uku, was abducted at about 1:47pm by a gang of armed men who seized her at the gate of the palace at Ogbe-ofu and took her away. Her husband was said to have travelled out of the town.

The police have, however, arrested a man who allegedly left the compound few minutes before the incident took place. The man was said to have informed the housemaid that he was in the palace to take the queen mother to somewhere in the town.

LEADERSHIP gathered that the kidnappers, numbering about 10, lurked around the palace until the woman and her maid came down to serve soft drinks to workers at the gate.

An eye witness account said that as soon as the woman came down from the main building and moved towards the gate, the criminals also moved in from the gate, grabbed her and pushed her into a waiting Volkswagen Golf car.

"The abductors were heavily armed when they walked into the compound," said one of the the witnesses. "They were about 10. They held up the men fixing the interlocking tiles and asked them to lie face down. Immediately they saw her (the king's wife who was coming towards the gate with her maid to serve the workers soft drinks), they bundled her into a waiting vehicle - a Golf car, while another car was parked outside."

One of the abductors was said to have had the temerity to go upstairs to collect the woman's handbag. Another of the eyewitness said that another maid, who sighted the kidnapper coming upstairs, hid herself in the kitchen.

On coming down from the upstairs, the kidnapper told his gang members that there was no one else in the house, and they zoomed off.

At the palace of Obi Okonjo yesterday, the atmosphere was gloomy as many sympathisers and well wishers, including members of the community's vigilante group, milled around, discussing the development.

When contacted, the State Police Public Relations Officer, DSP Charles Muka, confirmed the report, but said that the police were yet to make contact with the kidnappers.

Related story: kidnapping culture in Nigeria on the rise