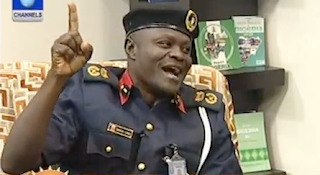 About three weeks after his gaffe on a television programme brought him and his organisation to ridicule, Mr. Shema Obafaiye, the Nigeria Security and Civil Defence Corps (NSCDC) Lagos Commandant, from whose comment the popular joke, 'My Oga At the Top' was coined, has been redeployed from his post.

Obafaye has been replaced by Mr. Adesuyi Clement from the Oyo State Command.

Obafaye became an object of nationwide snide remarks after he committed a gaffe when he featured as a guest on a breakfast show on a Lagos-based private television, Channels Television, a development that embarrassed the NSCDC authorities.

The hint of Obafaye's removal was given, weekend, when the Commandant General of the NSCDC, Dr. Olu Abolurin, while visiting Lagos over the recent killing of two of his men, introduced Clement as the new commandant of the NSCDC in Lagos to journalists.

Although Abolurin did not give reasons for Obafaye's replacement, many readily connected the action to his embarrassing outing on the television programme.

The NSCDC, in the days following Obafaye's gaffe, had denied that it had taken any disciplinary action against him, though reports said he had been suspended.

Obafaye's ordeal began March 12 when he appeared as a guest on the television's flagship morning programme, Sunrise Daily.

During the programme, one of the presenters of Sunrise Daily had asked the commandant for the domain name of the NSCDC's website. There had been reports of a recruitment scam that had to do with some people setting up a fake website of the para-military organisation to con job seekers.

But to the presenters' surprise, Obafaye, appearing confident and exultant, said he could not give the domain name of the website now, and it would turn out, in his words, "My Oga at the top" (his boss) would give a different domain name later.

The presenters prodded the officer further, explaining that they merely wanted the organisation's functional website, so that the public could be wary of falling into the hands of fraudsters, who had set up the fake website.

Obafaye, behaving as though he now understood the question clearly, shocked his interviewers, and viewers alike, even further when he gave the NSCDC's domain name as "ww.nscdc." He paused a few seconds and added, "that's all" without including the ".com" or ".org" or ".ng" url-ending that should have completed the website address.

It was a celebrated show of ignorance, even though many sources close to the operation of the commandant confirmed that he was competent as a field officer. But he was not keeping with the trends. He apparently was not computer or even internet savvy. A defect that shows that a modern-day leader, whether in the military or any such service, must be updated with technological trends and developments in all sectors of the economy.

He merely betrayed the fact that he knew little about information technology. He could have saved the day by politely admitting not readily knowing the domain name.

It is, perhaps his shortcoming on the IT-related discuss, that upped the ante of his folly; otherwise, the expression "my oga at the top", is a running cliché in Nigerian public service, especially in the military and para-military services.

After Obafaye's howler, the footage of the interview instantly went viral on social media, making him an object of several rude jokes, including graphic illustrations on Blackberry Messenger, Facebook , Twitter, T-shirts, and musical mixes by DJs.

It was one gaffe that Nigerian youths, especially feasted on. In no time, special branded 'T' shirts had been produced, just as musical mixes had been waxed with mischievous finishing and imputations in celebration of Obafaye's gaffe.

One of such musicals, which has former President Olusegun Obasanjo in an overcast butterfly dance, was being circulated on the internet.

The 'T' shirts were said to have sold several thousand pieces within and outside Lagos, with several celebrities donning the "My Oga at the Top" outfit. It was a cruel joke that successfully entertained many Nigerians.

What's more, already there is a video film titled "My Oga at the Top" which is also selling swiftly in the market.

Reports were to later indicate that Obafaye was psychologically knocked down by the outcome of his poor showing at the television house, as he was said to have lost sleep and even appetite for days.

His redeployment is thus seen as the organisation's response to the embarrassing outing last month. But sources said Obafaye had been adept in the policing of the many petroleum pipelines in Lagos and its environ. The source noted that the recent frequency of arrest of pipeline vandals and petroleum product thieves is because of Obafaye's vigilance and mastery of his job.

The source asked rhetorically, "Do you know for how many years this crime of petrol theft has been going on in Lagos? Do you think it just started yesterday? It is because oga (Obafaye) is determined to crush the several cartels that we have been reading and hearing of many such arrests. Others had been co-operating with the criminals in the past."