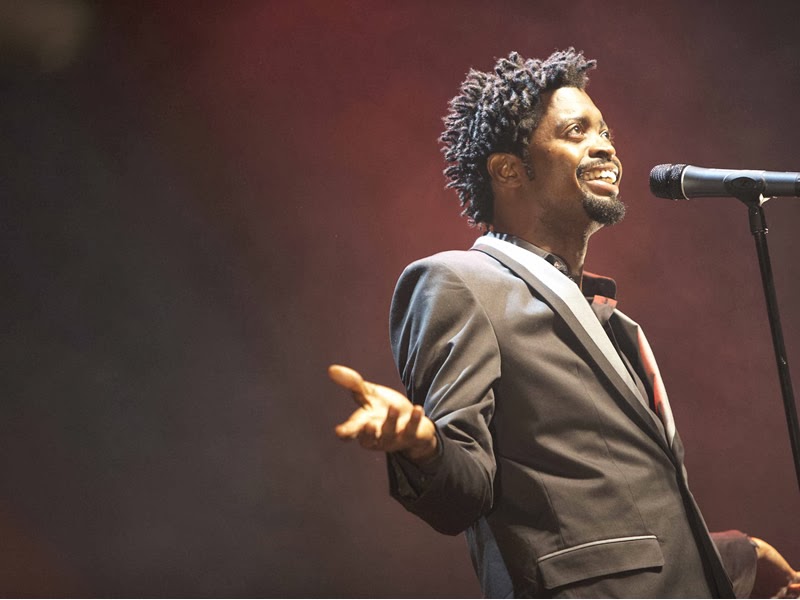 The Nigerian comedian Basketmouth has come under fire on social media after posting a joke about the difference between dating "white girls" and "African girls". In a nutshell, white women put out after a couple of dates, but African women keep holding out, so on the ninth date a bit of rape is required.

Funny? No. Instead, most Nigerian and other African commentators found it offensive. Basketmouth was trivialising rape in a country suffering from an epidemic of sexual violence.

"Show me a man who is insensitive to rape and I'll show you a man who is capable of rape&hellip," tweeted the Nigerian novelist Chika Unigwe.

Basketmouth had his defenders, who went the usual route of calling those who criticised him over-sensitive, or humourless, or saying they perhaps missed some grand satirical intention.

The comedian himself eventually claimed that he was trying to flag up an important social issue: "I would never in a thousand lifetimes encourage rape, I broadcasted a joke that many clearly misunderstood and have found offensive and I sincerely apologise, the intention however was to highlight an unfortunate trend and the ridiculously flawed comparison between money & the worth of a woman."<

But his full apology only came after a half-hearted first attempt, and he has form – a year ago he entertained a British crowd with a charming granny-rape joke.

Basketmouth is just one in a pantheon of international stand-up comedians to use the rape of women as a subject for a cheap laugh (British 'comic' and tax avoider Jimmy Carr has been mining this seam for years). But in Africa he is a lightning conductor – he's the one with the big profile, who chose to shout out his rape joke to his one million Facebook fans. He's the big goofy team mascot for those Nigerian men who think women are teases and there for the taking. #basketmouthgate, as nobody called it, opened up a whole debate about the subject of rape in Nigeria and beyond.

There is no doubt that rape is a problem in Nigeria. When writer Elnathan John spoke about marital rape, he was attacked by angry men for daring to suggest that a woman could withhold sex once the ink on the marriage contract was dry.

On Twitter this week he said: "There is a reason Basketmouth makes so many people laugh with female rape jokes. We condone it. It is not yet a big deal here… All rape is abominable, but I tell you if men got raped as often as women, there would be no celebration of rape jokes."

Victim-blaming is widespread in Africa and much of the world – an Indian judge recently said that a Dalit woman who was brutally raped had indicated her sexual availability by going out of her house after dark. Across many countries in Africa, so called mini-skirt laws are being debated – the implication being that men are animals and women pieces of meat who should know better than to flash the flesh at their predators.

What happens in Nigeria is that women are often raped. They are raped in their homes by their husbands, on dates with men who think that a meal or a few drinks have purchased her consent; they are raped in police custody; they are raped by their teacher, professor or fellow students when they're trying to get their education.

The state colludes with this by failing to collate coherent statistics about rape and sexual violence, rendering these crimes invisible – or at least until some buffoon raises his head above the parapet to joke about them.

It seems that perpetrators can often get away with rape, but that critics jumping on a rape joke by a comedian is beyond the pale for some. Get a sense of humour and stop messing with our fun, was the general message from Basketmouth's apologists, mostly men. Nigerian-British blogger Mia Farraday (a pseudonym) was one of Basketmouth's biggest detractors on Twitter. "I made a fuss about this quite deliberately. Not because I've never heard a rape joke before or because I'm a secret Basketmouth hater… It's because Nigeria has a real and present rape epidemic and because our sense of humour about everything is often detrimental."

Writer and former Basketmouth fan from Zimbabwe Barbara Mhangami addressed a strong blog post to him after the joke was made public. In it, she says:

"From an early age girls are taught to view themselves from the negatives that are heaped on them because men rape. It is girls' fault that men are depraved. We teach them not to walk alone after dark, not to be alone with boys, to wear 'decent clothes. Yet after all this, many are still raped. Why is that, Mr Basketmouth? BECAUSE BOYS AND MEN ARE NOT BEING TAUGHT THAT RAPE IS NOT A JOKE!"

Of course, rape culture diminishes men as well as women. A woman is passive, a thing, without agency – but a man is, says the rape culture model, a flesh-covered skeleton with a penis and a bunch of uncontrollable impulses. Yes, most of humanity are capable of gross abuses of power if they are conditioned to them and feel they have the backing of the crowd – what is wrong can seem like the norm, or even funny or enjoyable.

Challenging rape culture is about calling out the men, one by one, who joke about or belittle women, and violence against them. It's about looking one man in the eye – your colleague, your family member, your friend – looking directly at them and explaining why one flippant comment can add to the weight of ALL the comments, which in turn diminish women as humans, which in turn makes it easier for a man to do what he can to them without their conscience reacting.

And this time, on Twitter at least, Nigeria fought back. Its women, and many of its men, called bullshit on Basketmouth, they hit him where it really hurts – in the wallet – by threatening to boycott his shows and by alerting his sponsors to his joke.

As Nigerian TedxEuston organiser Patrick Anigbo put it: "Well done to my people for rejecting this scourge totally. And those few thousands that did not get it, I hope you have learnt today."

Several Twitter users even suggested that Basketmouth should use his platform to educate his fans about rape culture – or even become an anti-rape activist. So, Basketmouth, the ball's in your court. But the ball is also in the court of every citizen of Nigeria and any other country where rape culture reigns.