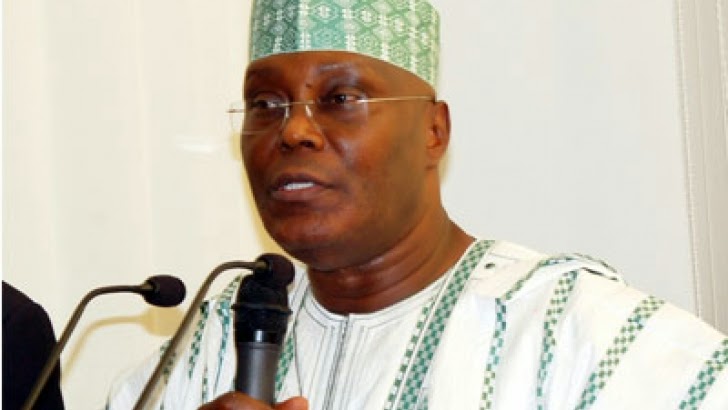 A former Vice-President, Alhaji Atiku Abubakar, has formally declared his intention to contest the 2015 Presidential election on the platform of the All Progressives Congress.

Abubakar, at a ceremony held at the Yar’Adua Centre in Abuja on Wednesday, explained that his desire to become President was born out of the need to give back to the nation.

Imo State Governor Rochas Okorocha and the Publisher of Leadership, Sam Nda-Isaiah, had also declared interest in the APC presidential ticket. A former Head of State and National Leader of the APC, Maj. Gen. Muhammadu Buhari (retd.); Edo State Governor, Adams Oshiomhole, and Governor of Kano State, Rabiu Kwankwaso, have been reported to also have interest in the ticket.

A confident Abubakar told his supporters during the ceremony that he had the capacity to bring people together and turn things around for the better in the country.

He pointed out that the glaring mismatch between “our potential and our achievements provides a golden opportunity” for him to lead Nigerians to rekindle their innovative instinct and turn the Nigerian dream into a reality.

He explained that in spite of many challenges faced by Nigerians, they had refused to give up on the country.

The former Vice-President said the 2015 elections were about Nigerian youths and the nation’s future.

He stressed that the nation, under the current administration, had failed to provide the required environment for the youth to reach their full potential.

The former vice-president said, “It is inspiring that amidst difficulties and growing anxiety over the future of our country, our people have refused to succumb to despair and hopelessness.

“This never-say-die attitude gives me immense hope and it is one of the reasons why I can never give up on Nigeria.”

Reacting to the agitation for generational shift, he said his generation owed younger Nigerians the responsibility of offering its political shoulders to them to climb upon.

This, he said, was necessary to improve their vision and expand their horizon.

He noted that it was this trans-generational collaboration and partnership that represented the best model to create the future that the nation desired and deserved.

Nigeria, he said, should never again be subjected to leadership experimentation or learning on the job.

He recalled that the Olusegun Obasanjo administration which he was a part of successfully reformed some critical sectors of the economy such as telecommunications and the capital market.

Abubakar said, “As Vice-President from 1999 to 2007, I worked closely with my boss, Chief Olusegun Obasanjo, who is a passionate defender of Nigerian unity.

“We focused on macro-economic stability and transforming critical areas such as banking, insurance, oil and gas, telecommunications, pension and the civil service.

“We created institutions that should lay the foundation for good governance and accountability such as the Bureau of Public Procurement, the Economic and Financial Crimes Commission, SERVICOM, whose golden rule is ‘Serve others as you would like to be served.’ Sadly, most of these institutions are now mere shadows of themselves.”

He said the Obasanjo administration was able to deliver because it had vision, commitment and dedication .

The former Vice-President expressed sadness that rather than pay down the nation’s debts, “our borrowing has been on the increase even at a time the price of oil has consistently been above $100 per barrel since the inception of the Goodluck Jonathan administration.’’

He argued that resentment, disillusionment and hopelessness were the factors on which insecurity and disharmony thrived.

Nigeria, he said, was more divided today than at any other time since the civil war, adding that there was a disturbing rise in ethnic nationalism and religious bigotry because “we have a governance deficit.”

The aspirant said, “Our country seems to be on auto pilot with no one in charge. Nigeria now more than ever before, needs a strong, dynamic, decisive, competent and visionary leadership that can halt the current drift of the ship of state. Corruption needs to be fought, jobs need to be created, our infrastructure needs to be rebuilt, social services need to be provided and insecurity needs to be tackled in a decisive, robust and multi-pronged way.”

While commending the leadership of the APC for adopting the modified open primaries in selecting its flag bearers at all levels, Abubakar said the party remained the most potent political force to end years of PDP’s dominance of the political space.

The leader of the National Assembly caucus of the APC, Senator George Akume, who spoke on behalf of other party leaders at the event, said the APC has within its ranks, the men and women who have what it takes to rebuild Nigeria.

Meanwhile, three politicians and two lawyers have separately asked a Federal High Court in Abuja to stop Jonathan and Vice-President Namadi Sambo from re-contesting in 2015.

The plaintiffs argued in their suits that by the virtue of constitutional provisions, the President and the Vice-President, had previously been elected for one single term of four years.

Two politicians – Adejumo Ajagbe and Olatoye Wahab – filed the first suit while two lawyers and another politician filed the second on September 19 .

The lawyers are Mase Acho and Saeeq Sarki. The third is Murtala Abubakar.

Ajagbe, who claimed to be a member of the PDP in Lagos State, and Wahab, a member of the APC in Ogun State, said they were presidential aspirants whose interest would be jeopardised if Jonathan and Sambo were not barred.

The two plaintiffs, who engaged the services of four Senior Advocates of Nigeria, joined the Independent National Electoral Commission and the Attorney General of the Federation as defendants.

The SANs are James Ocholi, A. J. Owonikoko, Okon Efut and Mahmud Magaji.

The suit marked, FHC/ABJ/CS/662/2014, was assigned to Justice Ahmed Mohammed but the two defendants have yet to respond to it.

The plaintiffs argued that by virtue of the oaths taken by Jonathan and Sambo following the death of President Umaru Yar’adua in 2010 and their subsequent re-election in 2011, both of them were deemed to have completed the two terms allowed by law.

Their statement of claim read in part, “That being so, the reference to ‘two previous elections’ in Section 137(1)(b) of the Constitution includes two previous oath of allegiance and oath of office as President.

“It is therefore safe to conclude that a Vice President, who had taken the oath of allegiance and oath of office for two previous terms as President is, in law, deemed to have been elected into the office of President at two previous elections, thereby standing disqualified to contest another election into that office.”

They raised five questions for the court’s determination and sought seven reliefs, including an order of perpetual injunction, restraining the AGF and INEC from accepting as candidate in the 2015 presidential election, anybody caught by “two-previous election limit and eight-year term limit.”