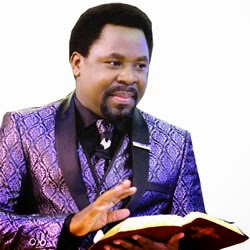 He’s the charismatic Nigerian preacher whose prophecies of death and disaster, and improbable claims to cure HIV and Ebola, have brought him vast wealth and a devout following among many of Africa’s most powerful politicians and celebrities.

But it’s a disaster that T.B. Joshua failed to prophesize that has gotten him into serious trouble. One of his church buildings in Lagos, Nigeria, has collapsed, killing at least 70 people, including 67 South African pilgrims – the biggest loss of life among South Africans outside the country in recent history.

The disaster has shone a spotlight on one of Africa’s most controversial televangelists. The Nigerian preacher has become famous for his estimated wealth of $10-million to $15-million (U.S.), his weekly sermons to 15,000 people, his loyal following from African presidents and prime ministers, and his claim that he prophesized everything from the death of Michael Jackson to the disappearance of Malaysia Airlines Flight 370.

When the five-storey guesthouse suddenly collapsed into rubble at his church headquarters last Friday with hundreds of pilgrims inside, Mr. Joshua at first tried to minimize the disaster. On his Facebook page, his ministry dismissed it as a mere “incident” in which a “few people” were affected but were “being rescued.”

Later, the preacher tried to blame the Boko Haram terrorist group, claiming, bizarrely, that a mysterious low-flying airplane had caused the building’s collapse by spraying it with an unknown substance, although officials said there was no evidence of a terrorist link.

Instead, there is mounting evidence the building collapsed as a result of poor construction. Three additional storeys were being added onto the original two-storey building when it imploded. Similar collapses have become common in Nigeria, where construction regulations are often evaded, sometimes with bribes.

There are also growing allegations Mr. Joshua and the Nigerian authorities have tried to cover up the extent of the disaster. His church officials refused to allow emergency officials to participate in the rescue of survivors until Sunday. Nigerian officials were slow to co-operate with South Africa, even though an estimated 300 South African pilgrims were in the guesthouse when it collapsed.

As recently as Monday, three days after the collapse, the South African government was still struggling to find out if any of its citizens were killed. South African diplomats told local media that Nigeria was “completely stonewalling” their investigation.

Nigerian officials even allegedly told the diplomats the disaster was “not that bad.” One diplomat was quoted as saying: “When we got here, the entire building was flattened. How can it be not bad?”

South African President Jacob Zuma finally announced the deaths on Tuesday night. “We are all in grief,” he told the nation. “Not in the recent history of our country have we had this large number of our people die in one incident outside the country. The whole nation shares the pain.”

On Wednesday, International Relations Minister Maite Nkoana-Mashabane said the information about the deaths came from South African diplomats at the scene, rather than from Nigerian authorities as one would expect. But she said she would not do any “finger-pointing.”

In Nigeria, many people vented their anger through social media, saying Mr. Joshua should not be above the law. But the reality is that he has powerful friends and huge financial resources – enough to get away with a lot in Nigeria. Thousands of his followers are reportedly pressured into donating 10 per cent of their income to him.

His disciples have included the presidents or prime ministers of Ghana, Malawi, Zimbabwe, Zambia, Gabon and the Republic of the Congo. He is particularly beloved in South Africa, where his followers include Nelson Mandela’s ex-wife Winnie Madikizela-Mandela, opposition leader Julius Malema and Zulu King Goodwill Zwelithini.

Mr. Joshua’s vague “prophecies” have been celebrated by his fans. He gained massive publicity when he said an elderly African leader would die in 2012 – a fairly safe prediction, since so many of the 54 leaders are elderly. When Malawi’s president died, Mr. Joshua was again hailed as a prophet.

Medical experts have sharply criticized him for his claim that he can cure HIV, cancer, paralysis and even Ebola. Last month, he sent 4,000 bottles of “anointing water” to Sierra Leone to “heal” people with Ebola.