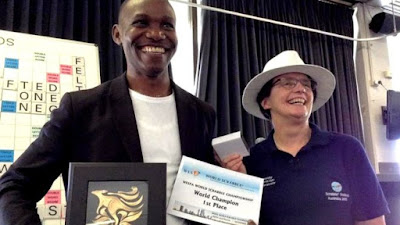 Nigerians have been congratulating countryman Wellington Jighere, who has become the first African to win the English-language World Scrabble Championship.

The 32-year-old beat Englishman Lewis MacKay 4-0 in the final in Australia.

Nigerian President Muhammadu Buhari was among those to congratulate him, saying he has "done the country proud".

Mr Jighere said on his Facebook page that he felt he was playing with the "whole continent" behind him.

He added that it "still baffles" him that he managed to win, given how tired he felt as he had "not slept well in about a week".

Wellington Jighere put down:
Dacoit - a member of a class of robbers in India and Burma
Yow - Australian slang for keeping a look-out
Katti - an alternative spelling for a weight used in China
Aah - an expression of surprise

He told the Guardian newspaper that he had training to deal with the fatigue from the jet lag, but also had to cope with 32 rounds of matches in four days before getting to the final in Perth.

Mr Jighere and the five other members of the Nigerian team only arrived in Australia the day before the tournament started, so had little chance to get over the 20-hour flight or the seven-hour time difference.

President Buhari phoned him in Perth to "rejoice" with him over the performance and pass on his congratulations to all the players, who finished the competition as the best team.

According to the president's spokesman, Mr Jighere "pledged to bring more glory to his fatherland".

He recently finished his national service following his graduation from university, but took a few months off from looking for work in order to prepare for the championship.

President of Nigeria's Scrabble federation Sulaiman Gora told the BBC on the telephone from Nigeria that Mr Jighere is a quiet person whose "greatest strength is humility".

Mr Gora, who also heads the Pan-African Scrabble federation, said that the "whole country and the whole of Africa is celebrating this success".

In 2008, Ivorian Elisee Poka won the French-language Scrabble World Championship and this year Schelick Ilagou Rekawe from Gabon reached the final of that competition. He lost to New Zealander Nigel Richards, who does not speak French.