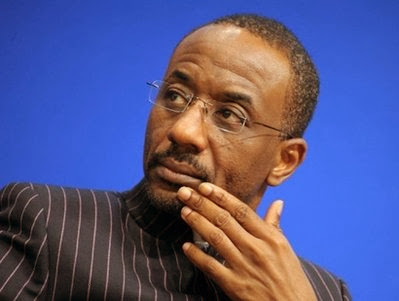 Respected former head of Nigeria's Central Bank Lamido Sanusi has said the government should end its policy of trying to maintain the value of the currency, the naira.

President Muhammadu Buhari told the BBC last week that he was not convinced of the need to "murder" the naira.

The falling oil price has put pressure on his currency policy.

The authorities are keeping the official naira rate at around 200 to the US dollar, but the black market rate is closer to 300.

The government relies on oil exports for vital foreign exchange and the declining price means there are fewer dollars in the country.

"The government does not have the reserves to keep the exchange rate at its official level in the market, " Mr Sanusi told the Financial Times.

The policy has "never worked" wherever it has been tried, he added.

But Mr Buhari told the BBC that he is yet to be convinced that he should allow the currency to be devalued.

In an effort to sustain the policy, the government has imposed currency restrictions, and halted the importation of certain goods in order to stop dollars leaving the country.

Mr Sanusi was the central bank governor from 2009 to 2014, when he was suspended by then-President Goodluck Jonathan following a row over corruption in the oil sector.

He is now the emir of Kano, an influential religious post among Muslims in Nigeria.