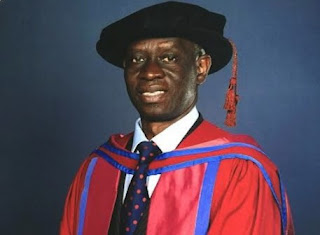 A Nigerian academic, Professor Abiodun Alao, will today deliver inaugural lecture at King’s College, University of London, making him the first black African scholar to deliver such lecture since the institution was established in 1829.

Alao, a professor of African Studies, was conferred with professorial title about two years ago alongside his Nigerian counterpart in the institution’s African Leadership Centre, Prof. Funmi Olonisakin, making them first black Africans to attain professorial cadre at the institution since its establishment.

The appointments have been confirmed in a letter by the institution’s President and Principal, Prof. Edward Byrne AC, justifying their elevations based on their contributions to African peace and security. According to a statement obtained by Vanguard yesterday, Alao had published several single-authored books, well-researched journal articles and occasional papers, among others, which findings and recommendations “have largely helped establish peace and boost security in many African countries.”

In an institution that produced 12 Nobel Laureates among its professors, the statement said Alao had distinguished himself, citing about 100 widely recognized 100 academic articles and encyclopedia entries he had published, all of which were assessed to accord him professorial title. As an academic tradition globally, the statement said the Nigerian academic would today deliver his inaugural lecture, titled, “Africa: A Voice to be Heard, Not a Problem to be Solved” at the Edward Safra Lecture Theatre at the college’s main campus.

The statement said the inaugural lecture, holding at the institution’s Edward Lecture Theatre on the Strand, “will be attended by many people from different parts of the world, including from the United States, Australia, Kenya, South Africa and Nigeria.” Aside his academic contributions, Alao joined the long list of globally renowned academics the institution had produced and whose research works had produced answers to different challenges of humanity and society since its establishment.

The statement pointed diverse assignments Alao had undertaken for international institution, which include the United Nations (UN), African Union (AU), European Union (EU), World Bank, ECOWAS and for many individual countries in Africa and beyond. It added that Alao was part of the 4-person team that undertook “a comprehensive threat assessment for Rwanda immediately after the 1994 genocide and was on the team of academic experts that advised former UN Secretary-General, Kofi Annan on the civil war in Sierra Leone. “He also co-authored the Concept Note for the Common Defence and Security Policy for the Africa Union and was the co-author of the first post-Civil War National Security Strategy Framework for Liberia.

He was a member of the team that worked on the Development of Donor Countries Effectiveness in Fragile States, the statement said. Ranking among the top 20 universities in the world, King’s College London holds a unique position in global scholarship, which the statement said, was evident in the landmark research works the institution’s professors and alumni had conducted since its establishment several decades ago.

Among its landmark research works, the statement cited the research that led to the discovery of the famous genetic testing, DNA undertaken at the College by Prof. Maurice Wilkins, while another retired scholar of the institution, Prof. John Lister, developed Antiseptic Surgery. It cited the researches of Prof. Charles Wheatstone, who “invented the first working telegraphs line and Prof. James Maxwell, who began humanity’s first steps towards a unified theory of physics by bringing magnetism and electricity together in a research that paved way for radio, television, radar and mobile phones. “The College also has among its former Professors, Thomas Hodgkin, who discovered the Hodgkin disease that was named after him and John Danrell who invented the world’s first battery,” the statement added.