Mob in Nigeria beat and burn boy to death 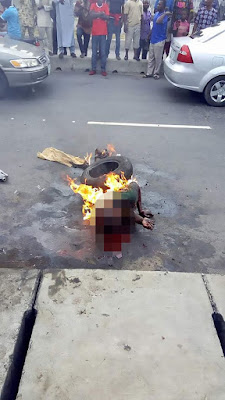 This is the horrifying moment an alleged thief is savagely beaten by an angry mob before he was burnt to death.

The boy was set upon after being accused of repeatedly robbing local residents and businesses, and even threatening to kill people, according to reports.

The incident took place in the Badagry district of the city of Lagos in the south-western Nigerian Lagos State.

The shocking footage shows the boy with a bloodied face holding his hands up as the mob surrounds him as he sits on the ground with his legs tied together.

He is beaten over and over again as he begs for his life, and a man can be seen trying to place a tyre around his neck to necklace him.

Necklacing is when a tyre full of flammable liquid is placed around someone’s neck and the fluid is then set alight, causing them to burn to death.

The boy, however, appears to manage to throw the tyre off.

As the pictures show, however, he was then apparently set alight anyway and burnt to death, despite the fact that some residents called for him to be handed over to police, according to reports.

The video clearly shows him being savagely beaten and later the images show him being burnt alive.

The gruesome scene was shared on social media, with reports about his age varying wildly, with some suggesting he was 15 years old, but with others saying he could be as young as seven.

Netizen ‘Oladipupo Raphael Dare’ was one of those who spread the footage, writing: "Lagos thief rest in bad. Good bye to you oooo..."

The boy had allegedly been caught in a supermarket trying to steal food, which he had been caught doing before on more than one occasion, as well as robbing locals.

The police have not yet commented on the matter.