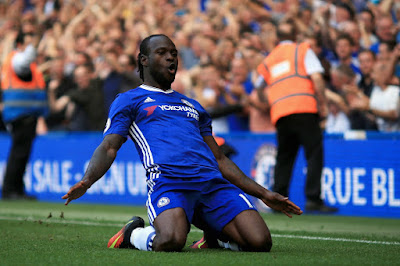 NFF Executive Committee member Chris Green has explained that surgery is the reason for Victor Moses's surprise omission from Nigeria's squad to face South Africa in a 2019 African Nations Cup qualifier next month.

The attacker, who helped Chelsea win the Premier League title this season, has been left out of Gernot Rohr's squad as he requires treatment on his toe.

"We decided it was best to let him have his surgery now so he can be ready for the new season."

Without Moses, Trabzonspor midfielder Ogenyi Onazi leads 22 other players named for the matchup against Bafana Bafana.

SC Zamalek defender Maroof Yusuf is a surprise first-time call-up. All invited players are expected in Abuja on Friday 2 June, with the team set to train on Monday 5 June before departing for Uyo on Tuesday.

The Super Eagles play Bafana Bafana at the Godswill Akpabio International Stadium, Uyo in their Group E opener on Saturday 10 June, with the match kicking off at 5pm local time.