Minister of State for Petroleum accuses NNPC boss of insubordination 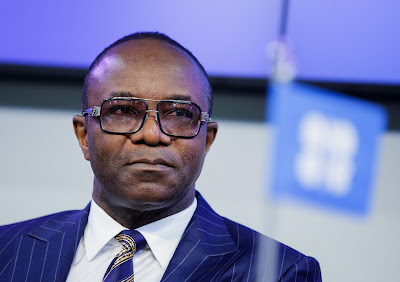 Minister of State for Petroleum Dr. Ibe Kachikwu has accused the Group Managing Director of the Nigeria National Petroleum Corporation (NNPC) Dr. Maikanti Baru of "insubordination and humiliating conducts" in a letter to President Muhammadu Buhari.

The letter, dated August 30, 2017, was circulated widely in the social media yesterday.

The NNPC had announced major appointments and redeployments on August 29, 2017.

"Members of the board learnt of these appointments from the pages of social media and the press release of NNPC," he said in the letter.

"Like the previous reorganizations and repostings done since Dr.Baru resumed as GMD, I was never given the opportunity before the announcements to discuss these appointments. This is so despite being Minister of State Petroleum and Chairman NNPC Board.

"The Board of NNPC which you appointed and, which has met every month since its inauguration and, which by the statutes of NNPC is meant to review these planned appointments and postings, was never briefed. Members of the Board learnt of these appointments from the pages of social media and the Press Release of NNPC,"Kachikwu said.

The minister said he had decided to bring to the attention of the president after one year of tolerating "these disrespectful and humiliating conducts" from Mr.Baru.

He consequently appealed to the president to approve that the recently announced reorganization in NNPC be suspended.

"My prayers most humbly and respectfully are that you save the office of the minister state from further humiliation and disrespect by compelling all parastatals to submit to oversight regulatory mandate and proper supervision," the letter read.

Mr.Kachikwu said he was constrained to write to President Buhari after failing to secure appointment to see the president "despite very many attempts."


The minister also pleaded with the president to save NNPC and the oil industry from collapse arising from the non-transparent practices of the GMD.

It is a normal correspondence - Ministry

Meanwhile, the Ministry of Petroleum Resources yesterday said the letter was "a normal procedural correspondence by the Minister to the President relating to developments in parastatals under his supervision."

"It is most distressing to the ministry of petroleum resources that a confidential communication to the President on the performance of one of its parastatals can be made public," spokesman for the ministry Idang Alibi said.

"The focus of the communication was on improving efficiency and deepening transparency in the oil and gas sector for continued investor confidence.

"It is noteworthy that the President has been fully supportive of the efforts of the Ministry to entrench good governance and accountability in the oil and gas sector," he added.

Alibi said the ministry remained focused on achieving measurable progress in the implementation of the ongoing oil sector reforms in line with the mandate of the President.

when contacted about the letter yesterday, the Group General Manager, Group Public Affairs Division of the NNPC,NduUghamadu, simply said: "I have not sighted the letter in question neither have I read it... "

He said he wouldn't comment "Until I see such letter."

Between Kachikwu and Baru

There have been little or no clues of a frosty working relationship between the minister and the GMD.

Buhari had in August 2015 appointed Kachikwuas NNPC boss, and named him as Minister in November 2016.

While Kachikwu held sway as NNPC GMD, Baru's name always popped up as his possible replacement.

But in a restructuring exercise at NNPC in March 2016,Mr.Baru was redeployed by Kachikwu from his position then as NNPC's Group Executive Director (Exploration and Production) to the petroleum ministry as Technical Adviser Upstream to the minister.

Baru was however appointed as NNPC GMD on July 4, 2016, while Kachikwu was named as the chairman of the NNPC board.Kachikwu had earlier doubled as minister and NNPC boss.

One of our sources said "Restructuring the NNPC was actually started by Kachikwu when he was the GMD. When Baru came in, he continued with the restructuring but in his own way. The consultants brought in by Kachikwufor the reorganisation exercise were disengaged. I think that was the beginning of the problem between the minister and the GMD."

'They should resolve problem quickly'

A board member of the NNPC, who spoke in confidence, said he was deeply pained that an issue which should have been resolved in camera was thrown to the public galore; thereby subjecting the NNPC to ridicule.

"You cannot rule out scheming in the board of any agency or parastatals and that's exactly what is happening in NNPC. But the most important thing is how the intrigues are managed. It was a serious embarrassment when we read the petition in the social media.

"Of course, all of us in the board are disappointed with the apparent misunderstanding between the minister and the GMD. Yes, there are issues relating to poor communication and consultation.

"But then, these are issues that ought to have been resolved. Remember, we have very prominent people on board, all of them in their own right, including the Chief of Staff to the president.

"Sadly, and for some obvious reasons, the minister ran out of patience and for the fact that he has his ways to the president, he took advantage of that and ensured that his petition was heard.

"We normally meet as at when due; we never missed any of our meetings and even when he was unable to attend for two times because of his tight schedule, the chief of staff had sent his memos.

"This altercation might possibly erode the successes in the oil sector. Remember the crisis we went through when the oil price crashed; but Nigeria was able to find its way at OPEC. At present, fuel price is gradually coming down. I hope this problem would be resolved quickly," he said.